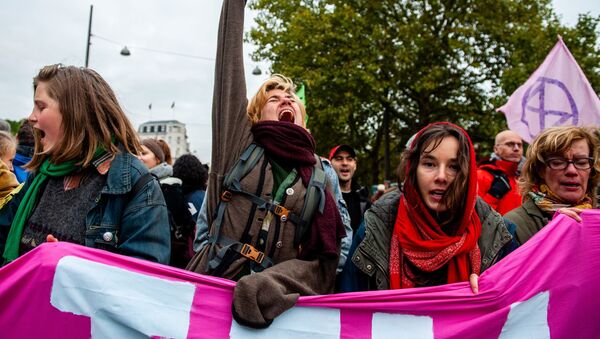 MOSCOW (Sputnik) - Activists of international climate movement Extinction Rebellion blocked roads in the centre of Amsterdam on Monday morning as part of the global campaign to raise awareness about what they describe as a climate catastrophe.

At photos posted by Extinction Rebellion on social media, hundreds of protesters are seen demanding stronger measures to fight climate change in front of the Rijksmuseum.

"Tell the truth! Wees eerlijk [Be Honest in English]! Blockade #ExtinctionRebellion in Amsterdam is a fact! We are here to stay to #RebelForLife," the movement tweeted.

Are we gonna fight for it? Yes! Are we gonna get it? Yes! #ClimateJustice #RebelWithoutBorders #ExtinctionRebellion Amsterdam rocks. #RebelForLife #ClimateCrisis pic.twitter.com/uZRn2FQfId

​The action takes place despite the ban of the city hall, which offered protesters to gather in a park nearby.

"The oceans are rising and so are we."

Extinction Rebellion launch their indefinite blockade outside the Rijksmuseum, Amsterdam as part of the International Rebellion Week. Until they are moved or their demands are met.

​Police, via loudspeakers, seek to convince the crow to leave the street and move to the location authorized by the city authorities.

For months, climate alarmism has been sweeping the world, with the youth regularly demonstrating in all the large capitals in the West but also Asia to demand urgent climate action from governments.

Often, such protests, accompanied by road blockades and even vandalism, end up with detentions.