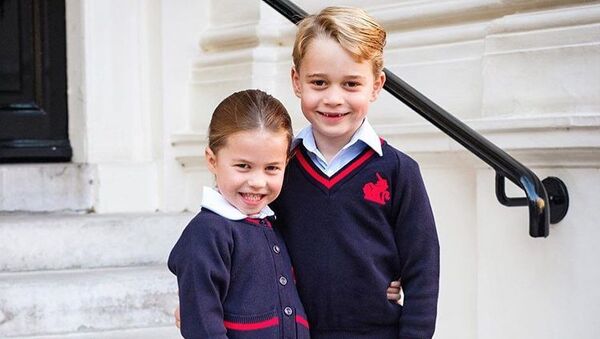 © Photo : instagram/cuppa_american_tea/
Subscribe
You may be in the Big Six, you may be the most titled football club in the English Premier League, you may pull unbelievable comebacks, and that would still not be enough to earn the love of sweet Prince George.

Prince George celebrated wildly when his favourite team Aston Villa thrashed Norwich 5-1 during their last game. He attended his first football match together with his parents the Duke and Duchess of Cambridge. His Royal Highness is very shy when it comes to appearing in public and being filmed by reporters, but who abides by royal etiquette when your team scores a goal?

Prince George had a great time cheering on Villa today.

​The video was shared on different social media platforms and netizens went crazy.

If my children don't look like this when they watch my favorite team play, I'm kicking them out of the house. #PrinceGeorge pic.twitter.com/yQMnfosXdn

​His celebration even impressed fans of other football clubs.

I am adie hard Liverpool fan but if @AVFCOfficial is good enough for George it’s good for me too! Go #AstonVilla 😍

​Seems like Tottenham, Arsenal and Chelsea fans are jealous…

He’s not felt the Villa pain that most of us have. Give it time he will look 100 years old in a week.

​Prince George followed in his father’s footsteps, who is also a Villa fan. The Duke of Cambridge once confessed about why he chose the club. All his friends at school supported either Manchester United or Chelsea, but Prince William decided to choose a more mid-table team that would give him emotional rollercoaster moments.

Aston Villa was one of the founding members of the Premier League in 1992, winning two League Cups. In recent years the club experienced lots of problems and even suffered relegation in 2016. This club managed to return to the Premier League only this season, and it seems it found its lucky mascot. Villa’s manager, Dean Smith, promised to give Prince George tickets to every game.