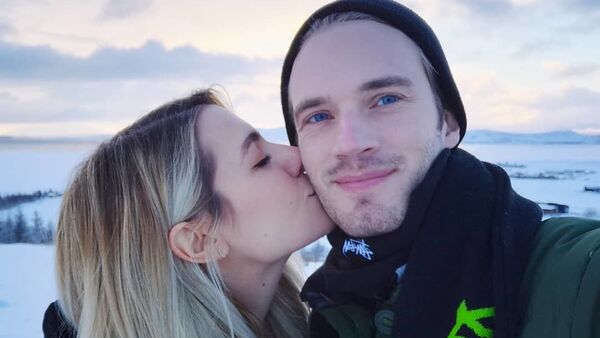 Swede Felix Kjellberg, better known as the most subscribed YouTuber PewDie Pie, and his long-time girlfriend Marzia tied the knot this past August. The couple travelled to the Asian island nation recently for what can be described as “their second honeymoon”. The blogger revealed earlier that he had purchased a house there.

Marzia Kjellberg, who is enjoying a trip to Japan with her husband, King of YouTube PewDiePie, has revealed in her Instagram stories that she had a knife accident that resulted in “lots of blood”. According to the 26-year-old, who is an entrepreneur and blogger with a seven-million-strong following herself, when she was opening a package of what looks like a traditional Japanese knife, it slid out and landed vertically on her bare toe with its tip.

“No fun. Lots of blood. Just a reminder to be careful handling knives”, she wrote, sharing a picture of the sharp-looking appliance.

Noting that she had received a lot of questions on her unfortunate unpacking accident, she returned to the story of her injured foot with a “toe update”.

“Thank you all for worrying about the toe. It is a very dark purple colour near the cut, so it’s not looking pretty BUT I’ve been able to walk all day so I assume it’s not that serious. I’m hoping it will heal on its own”, she posted.

A while later, she added that her toe was definitely getting better and that she was totally fine, noting that there was no need to worry and thanking her fandom for the concern.

I’m enjoying experiencing autumn in Tokyo for the first time...it is much warmer than you would expect! 🍁 I recently released a collaboration box with @tokidokitraveller illustrated by @alxndracook on the Autumn in Tokyo theme and it sold out quickly so I wanted to thank you all for the amazing support on it, and the brands that joined in! ✌🏻 There will be the very last subscription box coming this December, and I hope you will love it.🌷 📦 #ad

There were a lot more highlights from the blogging couple’s journey to Japan on her Instagram feed, as she shared several snaps of fireworks and photos of her friends.

“I’m enjoying experiencing autumn in Tokyo for the first time...it is much warmer than you would expect!” she posted.

Several days ago, PewDiePie, who is the most popular individual creator on YouTube, recently hitting an overwhelming 100 million subscribers, made a surprising announcement, saying that he's purchased a house in Japan. In the video, recorded in Japan, he said that this step was a dream come true for him.

Pewds admitted earlier this year that he and his then-fiancée had travelled to Japan, where he even proposed to marry Marzia, so often because they were contemplating moving there. However, it is unclear whether they will relocate to Japan for good.