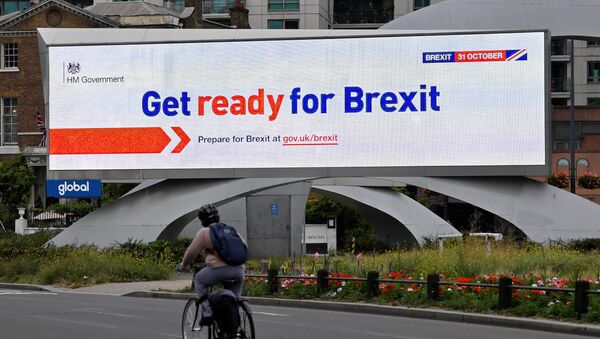 Lilia Dergacheva
All materialsWrite to the author
In a blatant rebuff, the European Commission made it clear there were insufficient grounds for further negotiations unless the UK came up with an “operational” solution to the Irish “backstop” among other issues. The UK ardently seeks new talks amid a coming Brexit deadline and an overview of proposed legislation during the Queen’s speech.

The EU's chief negotiator, Michel Barnier, has said the onus was on Boris Johnson's government to agree or not, to a no-deal divorce from the EU, as more than three years of talks between the bloc and the UK ended up on the brink of collapse the other day.

"If they do not change, I do not believe, on the basis of the mandate I have been given by the EU27, that we can advance," Barnier said on Saturday at an event in Paris thrown by Le Monde.

According to the negotiator, if the UK was still serious about the possibility of a deal, it would come up with "different proposals."

"I want to be extremely clear. 'No deal' will never be Europe's choice. It would be – and note the conditional tense because I hope still to find a deal – it would always be the UK's choice, not ours," Barnier explained at length, asserting that the European side was prepared and had taken "measures to protect our citizens and our businesses."

Barnier's comments followed another break-up in talks with the EU after the UK put new Brexit proposals to the bloc, which would keep Northern Ireland in a British customs union separate from that of the EU, but in the single market for goods. However, Brussels and Dublin indicated that the proposal was insufficient. According to Barnier, the plan posed a threat to the EU single market and didn't address EU concerns about the need for customs checks:

"We are a single market. That's a complete ecosystem, with common rights, common norms, common standards, common rules, a common legal system. It requires checks at its borders."

On Friday, at a meeting of government advisers, Johnson's closest aide, Dominic Cummings, said if Brussels did not temper justice with mercy vis-a-vis the UK's proposals, the UK would be prepared to leave with no deal in view. In the meantime, 10 Downing Street said all will and effort would be put into negotiations that went on throughout the four-day Tory party gathering in Manchester. Johnson would continue to "hit the phones over the next couple of days", and remains open to meeting EU leaders if they want to see him.

The culture secretary, Nicky Morgan, a former Remainer, also weighed in on the debate, explaining in the Observer her gradual change of heart:

"I know that some people may have been surprised when I took a role in Boris Johnson's cabinet, but what the critics miss is that there is nothing ultimately to be gained for our country or our constituents by any of us remaining stuck in our views from three years ago," she wrote arguing there was no way the ongoing Brexit limbo could continue.

"For that reason, I can support the Prime Minister's clear view that we must leave the European Union on 31 October – either with a deal or without one," she concluded her frank revelation.

However, according to Rory Stewart, the former Conservative minister that ran for Tory leadership along with Johnson and who made it clear last week that he was leaving the party to run independently for London mayor, Johnson risks attracting the ire of his supporters by promising to leave the EU by Halloween while being bound by the Benn Act that mandates a Brexit extension.
"Politicians often respond by making extreme and extravagant promises that cannot be delivered ('I will leave on 31 October – do or die)," he said adding that: they then blamed their "inevitable failure on some mysterious 'establishment', making people even angrier."

The Tangle of Internal Concerns

Apart from the talks beyond the British borders, the Prime Minister remains central in numerous internal controversies surrounding the EU exit, including the probability of a deadline extension stipulated by the new law adopted by Parliament in September before the contested suspension, which the Supreme Court ruled unlawful. More specifically, the Court of Session in Edinburgh is due to come up with a verdict in a case brought by anti-Brexit campaigners who want to ensure he seeks an extension to the UK's membership if no deal is struck with the EU by 19 October.

Johnson is meanwhile preparing to "squat" as Prime Minister in 10 Downing Street, even in the event of a vote of no confidence by his own government, to ensure that the initial Brexit deadline of 31 October is met, The Sunday Times of London reported.

According to the edition, as the government is preparing to outline and review its domestic policy programme in the first Queen's Speech since 2017, ministers expect it to be voted down by the House of Commons, thereby blocking the PM's effort to take the new agenda through parliament. To accomplish the latter, Johnson is rumoured to be ready to challenge the Queen to sack him instead of resigning himself.

While independent MPs are expected to join opposition parties to defend the Prime Minister, there are rumours that many of the 21 Tory rebels, who were expelled from the party amid a previous Brexit deadlock last month, would still vote with the government, as they are "at heart still Conservatives."

Mr Johnson has vowed to use the Queen's Speech, due to be rounded off with a vote of confidence, to deliver "a bold and ambitious domestic legislative agenda for the renewal of our country after Brexit".

According to Prime Minister Antii Rine of Finland, the country that currently holds the rotating six-month EU presidency, London is likely to request another extension (the third in a row) of the Brexit deadline in October irrespective of its harsh stance on deal conditions.

"It currently seems like there would not be a deal by the end of October and there is a danger of a hard Brexit," he continued while speaking to the German weekly Welt am Sonntag.

Earlier this week, British Prime Minister Boris Johnson sent out a proposal to bypass the backstop between the Republic of Ireland and the UK. In a letter to EU leaders, Johnson suggested "the potential creation of an all-island regulatory zone on the island of Ireland, covering all goods." The letter said that most of the trade would be controlled "electronically" with only a "very small number of physical checks."

The Prime Minister indicated that a no-deal divorce would be a "failure of statecraft" and threatened to walk away if the bloc doesn't engage. Having blocked the initiative, the EU responded by giving Johnson a maximum of seven days to make his plan acceptable to the European bloc. European ambassadors set 11 October, which is just ahead of a crucial 17 October EU summit, as the date for a "judgement call," according to key EU Brexit negotiator Michel Barnier, who told his colleagues that the government needed to "fundamentally amend its position."