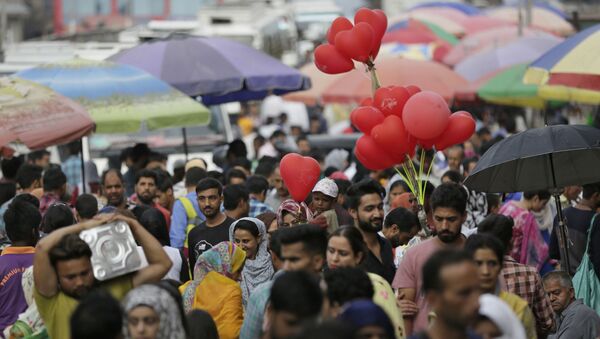 © AP Photo / Mukhtar Khan
Subscribe
International
India
Africa
New Delhi (Sputnik): A high-end Indian fashion brand has become embroiled in a debate, with its latest collection being inspired by Kashmir, stirring controversy for "exotifying" the region, which has been under a security lockdown since the Delhi government's decision to abrogate the special status of Jammu and Kashmir.

Raw Mango, a fashion brand specialising in luxurious fabrics and Indian textiles, has had to take down pictures of its latest collection's campaign "Zooni" (a Kashmiri word for moon) from their Instagram account after people slammed it for making an "opportunity out of people's misery" and propagating "neo-orientalism".

One photo featured a young Kashmiri bride wearing a traditional bridal outfit, while another showed a woman dressed in a pheran, a woollen dress worn in Kashmir.

In the midst of a siege, Raw Mango, an Indian design company, decided to launch a new line of textiles, exploiting Kashmiris and their suffering in the process.

One British Kashmiri writer and photographer will not stand for it. https://t.co/HEHDbnP79C

The attempt to launch the new line of clothing by the brand, however, seems to have struck a wrong chord with people, mostly Kashmiris, who were outraged and criticised the brand.

"No Kashmiris are to be seen and heard here. In fact, in case the point isn’t already clear enough, Kashmiris are being silenced and disappeared." https://t.co/Qp13yQLrGx

Following the backlash, the brand issued a clarification by saying that they began their research and textile development for "Zooni" in 2017 and denied writer and photographer Avani Rai’s involvement in the decision.

Updated press note as of Oct 4th: At Raw Mango our process of design requires a two year lead time, from research to stores. In November 2017, our design team began research and textile development for ‘Zooni’, a collection drawing from Kashmir. Each textile and silhouette is created through an exploration of this country - though traditions, rituals and craftsmanship across different regions. For instance our 2018 collection ‘Heer’, alluded to the culture of pre-partition Punjab. In May 2019, we began to explore campaign directions for Zooni, and a recce was done on May 2019 in Srinagar. The shoot was executed over 5 days from June 27 - July 2, 2019. A release was planned for August 8th, 2019 and given the political and social climate surrounding the region, the launch was postponed. The decision to withhold the images has since been under considerable discussion and concern. The decision to release the images shot by Avani Rai was the decision of the brand. It was not a decision of Avani’s, who requested to delay the release further. The campaign imagery for Zooni was released on the evening of Oct 2, 2019 on Instagram, and recalled that evening based on requesting the public sentiment on timing, as well as a request from Avani Rai.

"A release was planned for August 8th, 2019 and given the political and social climate surrounding the region, the launch was postponed. The decision to withhold the images has since been under considerable discussion and concern", a post on Instagram from Raw Mango read.

Clarifying the take of Avani Rai on the matter, who is the daughter of renowned photographer Raghu Rai and also the photographer for the campaign, they said: "The decision to release the images shot by Avani Rai was the decision of the brand. It was not a decision of Avani’s, who requested to delay the release further".

As part of preventive security measures, communication restrictions have been imposed since 5 August, when the Indian parliament scrapped the seven-decade-old temporary special status of Kashmir. As of now, landline connections have been made operational in some parts of the region and Internet kiosks have been set up in 10 districts of Kashmir.