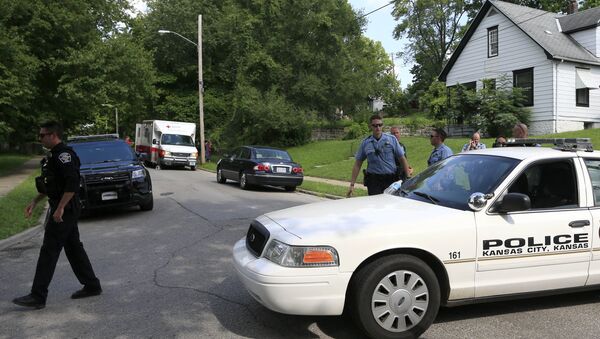 Nine people were shot in the gunfire, four of whom were killed, Thomas Tomasic of the Kansas City Police Department said, adding that law enforcement are looking for two suspects.

"We do not have a good enough description yet, to put anything out for a suspect, or suspects, we don't even know how many", Tomasic said, as quoted by the CNN.

Five people have been taken to hospital and are believed to be in stable condition, Tomasic added.

Reports say that an area spanning a couple of blocks, from Ferree to Baltimore, has been blocked off.

On scene near 10th and Central where officers responded to a shooting. 9 total people were shot 4 of the 9 are dead. We are told the suspect entered the bar Tequila KC and started shooting.
Police are still looking for the suspect. @41actionnews pic.twitter.com/5kwX69IkVF

This is what the scene looks like from Baltimore and Central Ave. @41actionnews pic.twitter.com/EMTLFc2nUV

​​A spate of mass shootings has prompted Republicans in Congress and the Trump administration to consider steps to toughen gun laws, such as universal background checks, red flag laws that would allow police to seize guns from unstable owners, and expanded mental health programmes.

At least 22 people were killed and more than 20 wounded after a gunman opened fire in a Walmart supermarket in the city of El Paso, Texas, on 3 August. A day later, a gunman killed nine people and wounded 27 others in a separate shooting in Dayton, Ohio.

From 2009 to 2017, at least 173 mass shootings took place in the United States, according to the advocacy group Everytown for Gun Safety.

000000
Popular comments
Something very very wrong with the social fabrics of the US of Na. Sociologists need to look into it impartially.