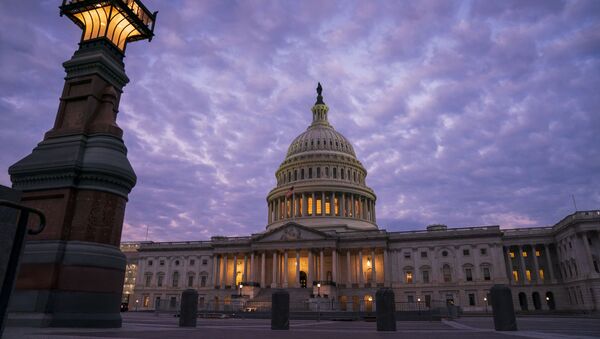 © AP Photo / J. Scott Applewhite
Subscribe
The first intelligence officer blew the whistle on President Trump’s dealings with Ukraine in August; the complaint centred on his July phone conversation with Ukraine’s president. Although Donald Trump denies any wrongdoing, another complaint, this time from a person closer to the events, may well embolden the ongoing impeachment inquiry.

A second US intelligence official is considering submitting his own whistleblower complaint over Donald Trump’s problematic phone call with Ukrainian President Zelensky which has triggered an impeachment process; The New York Times reported citing two sources briefed on the matter.

The official is said to have more direct knowledge about the events than the first whistleblower and reportedly was among those interviewed by Michael Atkinson, inspector general of the intelligence community, to corroborate the allegations brought by the original whistleblower.

Under the Intelligence Community Whistleblower Protection Act of 1998, if an official who works in intelligence wants to come forward about serious problems involving intelligence activities, they should file a whistleblower complaint with the inspector general to obtain legal protection from potential retaliation, such as firing or demotion.

It wasn’t clear, however, the NYT reports, whether the second whistleblower needs to file a complaint to shield himself from reprisal since he has met with Michael Atkinson’s office and has apparently gained the protections already.

The second complaint may add fuel to the ongoing impeachment inquiry into Donald Trump, triggered by the first whistleblower last week. At the centre of the first complaint is a phone call between Donald Trump and Ukrainian President Vladimir Zelensky on 25 July. During their conversation (a rough transcript of which has already been released), Trump asked Zelensky to investigate former Vice President Joe Biden, a leading Democratic 2020 hopeful, and his son over corruption allegations.

Trump insists he had not coerced his counterpart, while Zelensky also said he did not feel any pressure during the phone conversation. The House Democrats, however, believe the phone call provides evidence that Trump had used his presidential power to solicit foreign interference in the 2020 election.

White House May Stonewall the Dems

On Friday night, the House Oversight Committee subpoenaed the Trump administration to turn over documents on its dealings with Ukraine. The House Democrats had sent similar requests to Vice President Mike Pence, and Secretary of State Mike Pompeo, while depositions had been scheduled with five former and current State Department employees.

The situation has evolved into a full-blown constitutional crisis; Mike Pompeo has made it clear he would “use all means” to stifle the attempts to question his State Department colleagues, while the White House reportedly plans to tell House Speaker Nancy Pelosi that President Trump can ignore lawmakers’ demands in the Ukraine investigation until after a vote by the full chamber on its impeachment inquiry.

000000
Popular comments
Trump is scared and Pompeo will be convicted.
parkerjoe
5 October 2019, 08:33 GMT3
000000
you mean someone other than shifty schiff..that must be that other jerk brennan ..as long as they have some sort of spanner to throw into the works they will keep throwing them..this is am very very slow death march for "we the people" cann someone just throw some petrol onto it to get it nice and cosy
tonyw247
5 October 2019, 10:07 GMT2
000000
Newsfeed
0
New firstOld first
loader
LIVE
Заголовок открываемого материала
Access to the chat has been blocked for violating the rules . You will be able to participate again through:∞. If you do not agree with the blocking, please use the feedback form
The discussion is closed. You can participate in the discussion within 24 hours after the publication of the article.
To participate in the discussion
log in or register
loader
Chats
Заголовок открываемого материала
Worldwide
InternationalEnglishEnglishMundoEspañolSpanish
Europe
DeutschlandDeutschGermanFranceFrançaisFrenchΕλλάδαΕλληνικάGreekItaliaItalianoItalianČeská republikaČeštinaCzechPolskaPolskiPolishСрбиjаСрпскиSerbianLatvijaLatviešuLatvianLietuvaLietuviųLithuanianMoldovaMoldoveneascăMoldavianБеларусьБеларускiBelarusian
Transcaucasia
ԱրմենիաՀայերենArmenianАҧсныАҧсышәалаAbkhazХуссар ИрыстонИронауОssetianსაქართველოქართულიGeorgianAzərbaycanАzərbaycancaAzerbaijani
Middle East
Sputnik عربيArabicArabicTürkiyeTürkçeTurkishSputnik ایرانPersianPersianSputnik افغانستانDariDari
Central Asia
ҚазақстанҚазақ тіліKazakhКыргызстанКыргызчаKyrgyzOʻzbekistonЎзбекчаUzbekТоҷикистонТоҷикӣTajik
East & Southeast Asia
Việt NamTiếng ViệtVietnamese日本日本語Japanese中国中文Chinese
South America
BrasilPortuguêsPortuguese
NewsfeedBreaking
08:58 GMTRussia Approves Flight of Two Japanese Tourists to ISS, Marking Return to Space Tourism
08:48 GMTAstroworld Tragedy: Travis Scott Asks Judge to Dismiss at Least One of 300 Lawsuits Against Him
08:42 GMTWhite House: Video Call With Putin Only Item on Biden's Timetable for Tuesday
08:36 GMTPutin, Biden Set to Hold 'Secure' Video Call Amid Ukraine Tensions
08:33 GMTLaser Communications Relay Demonstration Launched Into Space From Cape Canaveral in Florida
08:15 GMTEx-Madhya Pradesh State Chief Slams BJP After Hindu Activists Vandalise Catholic School in India
07:49 GMTPrince Harry Raises Eyebrows as Duke Says Quitting Jobs Can Be Good For Mental Health
07:23 GMTArsenal Star Martin Odegaard Slams His Own Team After Shock Loss to Everton in Premier League
07:18 GMTIndian Farmer Turns Into Millionaire Overnight After Digging Up 13-Carat Diamond
07:10 GMTFramed Naked Photo of Ghislaine Maxwell and Other Nude Pictures Belonging to Epstein Shown at Trial
07:04 GMTChina Slams US for 'Trying to Disrupt' Beijing Olympics, Vows Response to Diplomatic Boycott
07:00 GMTMost Americans, Europeans Oppose Cancel Culture, Poll Reveals
06:42 GMTUS Completes Construction of Long-Range Radar Against Missile Threats in Alaska
06:41 GMTSweden's Newly-Minted Civil Affairs Minister Under Fire for Nazi Salute to White Power Music
06:32 GMTSlow Raab, Email Backlog & Staff Shortage: Whistleblower Reveals UK Foreign Office's Afghan Failures
05:44 GMTFormer NATO Boss Warns of 'Completely Concrete' Plans for 'Russian Invasion' of Ukraine
05:01 GMTSaab Shares Plunge as Finland Reported to Pick F-35 in Fighter Fleet Upgrade
04:48 GMTAnalyst Hopes Biden, Putin De-escalate US-Russia Tensions in Upcoming Video Call
04:44 GMTBiden Administration's Boycott of Beijing Olympics 'Minimal Option', Retired Diplomat Says
03:54 GMTVery Unstable: Astrophysicists Explain Why Our Solar System Has Shape of Croissant