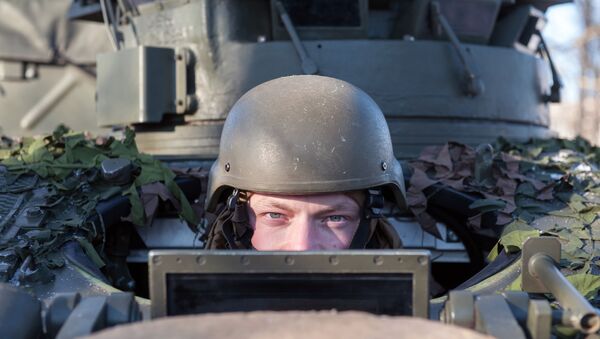 © Sputnik / Satnislav Savelyev
/
Go to the photo bank
Subscribe
When they clicked on a female profile in a dating app, they were probably hoping for a little romantic adventure. Instead, they turned out to be the lab rats for a NATO-led anti-disinformation test.

TG
5 October 2019, 11:03 GMT4
000000
Nato, the 'west', are very lucky that their hated 'enemy' is very, very patient with them. In fact, that legendary patience is bringing lots of dividends to Russia ! I say to the 'west' and Nato, the Baltic is not the North Atlantic, you are provoking Russia to war. The good news is that Russia is smarter, much more intelligent than you...you will not have a war, while YOU are declining rather fast. And the RF is growing by the months, in all aspects. Don't forget, spend LOTS of money, we all know there is plenty money ....:)
armor
5 October 2019, 11:47 GMT2
000000
Newsfeed
0
New firstOld first
loader
LIVE
Заголовок открываемого материала
Access to the chat has been blocked for violating the rules . You will be able to participate again through:∞. If you do not agree with the blocking, please use the feedback form
The discussion is closed. You can participate in the discussion within 24 hours after the publication of the article.
To participate in the discussion
log in or register
loader
Chats
Заголовок открываемого материала
Worldwide
InternationalEnglishEnglishMundoEspañolSpanish
Europe
DeutschlandDeutschGermanFranceFrançaisFrenchΕλλάδαΕλληνικάGreekItaliaItalianoItalianČeská republikaČeštinaCzechPolskaPolskiPolishСрбиjаСрпскиSerbianLatvijaLatviešuLatvianLietuvaLietuviųLithuanianMoldovaMoldoveneascăMoldavianБеларусьБеларускiBelarusian
Transcaucasia
ԱրմենիաՀայերենArmenianАҧсныАҧсышәалаAbkhazХуссар ИрыстонИронауОssetianსაქართველოქართულიGeorgianAzərbaycanАzərbaycancaAzerbaijani
Middle East
Sputnik عربيArabicArabicTürkiyeTürkçeTurkishSputnik ایرانPersianPersianSputnik افغانستانDariDari
Central Asia
ҚазақстанҚазақ тіліKazakhКыргызстанКыргызчаKyrgyzOʻzbekistonЎзбекчаUzbekТоҷикистонТоҷикӣTajik
East & Southeast Asia
Việt NamTiếng ViệtVietnamese日本日本語Japanese中国中文Chinese
South America
BrasilPortuguêsPortuguese
NewsfeedBreaking
YesterdayCommerce Sec. Urges House to Pass Act Supporting Manufacture of Semiconductors in US - Report
YesterdayRobbed Lewandowski: Football Fans React to Messi Winning Ballon D'Or
YesterdayVideos: Two Killed in Niger by French Army Convoy in Latest Protest Against Paris’ Forever War
YesterdayCDC 'Strengthening Recommendation' on COVID-19 Vaccine Booster Doses for Adults
YesterdayPentagon Global Posture Review Strengthens Deterrence Against Russia, China
YesterdayOver 30 Hospitals in New York to Cease Elective Procedures Amid COVID-19 Surge
YesterdayFed's Powell Warns Omicron Poses Greater Risks to US Economy, Increases Uncertainty for Inflation
YesterdayPentagon Confirms Austin Ordered Inquiry Into 2019 US Airstrike in Syria That Killed Civilians
YesterdayGOP Senator Calls Biden ‘Mad Hatter’ For $1.75 Trn Bill, Says Based on ‘Alice in Wonderland’ Logic
YesterdayDisgraced Cuomo Continues to Receive State Pension Even Amid Ongoing Criminal Probe - Report
YesterdayLionel Messi Wins 7th Ballon d'Or
YesterdayNATO Chief Says Bloc Seeing Biggest Expansion of Defense System Since Cold War
YesterdayIns and Outs of Labour Leader Starmer's Front Bench Shake-Up
YesterdayProcess of Restoring JCPOA Will Not Be Easy, Russian Envoy Says
YesterdaySeven UN Staffers in Unexplained Detention as Ethiopia Arrests UNICEF Employee
YesterdayAfghan Air Forces Hold First Military Drills Since Taliban Takeover - Reports
YesterdayPhotos: Ethiopian Army Recaptures Strategically Important Town of Chifra, on Edge of Tigray State
YesterdayIsrael Pleads With Countries to Ignore Iran's 'Nuclear Blackmail', as Tehran Set to Salvage JCPOA
YesterdayIsrael Shares Intel With US, Allies on Iran Moving to Enrich Uranium to 90% - Reports
YesterdayGerman Court Rules Kohl's Widow Cannot Inherit $1Mln Compensation From Journalist