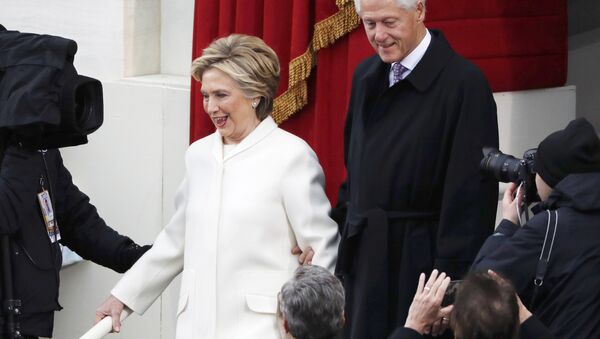 © REUTERS / Lucy Nicholson
Subscribe
Ekaterina Blinova
All materialsWrite to the author
While attacking President Trump, the Dems and their donors remain silent about their own collusion with Ukrainian officials and tycoons. Wall Street analyst Charles Ortel and US academic Sean D. Foreman have explained why the Dems, Hillary Clinton, and George Soros are the wrong people to push Ukrainegate against Trump.

Ukrainegate has backfired on the Democrats and their donors, as Donald Trump's attorney Rudy Giuliani claims that the Ukrainians have brought him evidence of Hillary Clinton, the Bidens, and George Soros' alleged collusion with the country's officials and tycoons.

"This information was given to me, I didn't go looking for Joe Biden. The Ukrainians brought me substantial evidence of Ukrainian collusion with Hillary Clinton, the DNC, George Soros, George Soros' company - they put it in my lap", Giuliani said on Fox News' "Hannity" show on Wednesday.

The attorney's words seem hardly surprising given the Obama administration officials' role in the 2014 Euromaidan Revolution and, in particular, the infamous leak of a conversation between then Assistant Secretary of State for European and Eurasian Affairs Victoria Nuland and then US Ambassador to Ukraine Geoffrey Pyatt on how they would form the new Ukrainian government.

Yet another leak, by hacktivist group CyberBerkut, exposed an email dated 12 March 2015, in which American billionaire and investor George Soros outlined "a short and medium term comprehensive strategy for the new Ukraine" for then Ukrainian President Petro Poroshenko.

Still, according to Wall Street analyst and investigative journalist Charles Ortel, the US government and Soros' involvement in Ukrainian affairs started much earlier.

Bill & Hillary Clintons' Ukraine Links Trace Back to the 1990s

"To evaluate present controversies touching upon Ukraine, Russia, and other former parts of the Soviet Union, Eastern Europe and satellite nations, one must remember that Bill Clinton was president precisely as the Cold War ended", Ortel says. "Clinton's backers then, fugitive Marc Rich and many others, as well as backers of the Bush family and other prominent Republicans profited thereafter enormously from 'privatisation' transactions wherein state-owned assets [of post-Soviet states] were transferred to new owners, often at fire-sale prices".

"I believe that The William J. Clinton Presidential Foundation (its original legal name) became involved in Ukraine by 2004, even though it then had no valid legal authority to operate outside of Little Rock, Arkansas, let alone in Ukraine", he notes referring to the "Clinton Foundation HIV/AIDS Initiative" and its cooperation with Ukrainian oligarch Victor Pinchuk and his wife Olena Franchuk, the daughter of Ukraine's second president, Leonid Kuchma.

Ortel highlights that according to the Clinton Foundations' data, cumulative donations from "The Victor Pinchuk Foundation" ran between $10 million and $25 million, while those from his wife's Anti-AIDS Foundation ran a further $1 million to $5 million.

The real problem is that neither the Clintons' HIV/AIDS Initiative nor Pinchuk's entities seem to be properly organised, prompting suspicions of potential financial fraud, according to the analyst, who does not rule out that the Clinton Foundation may become collateral damage of the House Dems-spearheaded Ukrainegate probe.

"Hillary Clinton is the wrong person to push this case against Trump", Foreman underscores. "She has a tainted background, is too close to the situation, and isn't very popular now in America. Democrats are better off having the members of Congress and current presidential candidates making the accusations against the Trump team. Words coming from Clinton's mouth have less credibility on this matter". 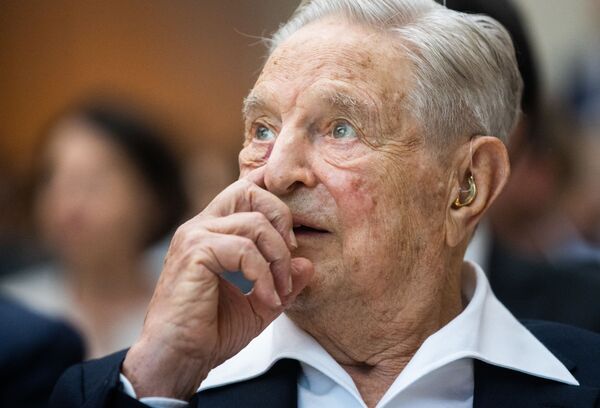 According to Ortel, George Soros also jumped at the opportunity to gain profit in Ukraine in the early 1990s "using poorly-controlled, false-front 'charities' engaged in the practice of routing payments to key actors and their associates who hold influence over the regulatory affairs in the countries concerned".

According to The Washington Post, Soros' OSF has supported a vast network of NGOs in Ukraine for decades.

However, not everything has gone smoothly for the American billionaire, as in 2016, the Anti-Corruption Action Centre (AntAC), an NGO sponsored by the US government and Soros, among other high profile donors, found itself in the crosshairs of then Ukrainian Prosecutor General Viktor Shokin.

"The focus on AntAC — whose youthful street activists famously wore 'Ukraine F*&k Corruption' T-shirts — was part of a larger probe by Ukraine’s Prosecutor General’s Office into whether $4.4 million in US funds to fight corruption inside the former Soviet republic had been improperly diverted", The Hill's John Solomon reported in March 2019, describing how the US Embassy in Ukraine and the Obama administration tried to upend the investigation and later gave incoming Prosecutor General of Ukraine Yuri Lutsenko a list of people "whom [Kiev] should not prosecute".

"George Soros is among the most powerful patrons of the Washington DC swamp, and has long operated in world capitals using a playbook that seems to have worked well for him", Ortel says. "His Open Society Foundations (OSF) create a passport for him to function in the guise of [a] selfless philanthropist… As for why Soros has flourished for so long, this is a question for politicians in both parties, not simply the Obama administration and its holdovers".

Impeachment Op: How is Soros-Funded OCCRP Connected to Whistleblower's Complaint?

What is more interesting, according to the investigative journalist, is the link between Soros’ OSF-funded Organised Crime and Corruption Reporting Project (OCCRP) and a whistleblower whose complaint became the cornerstone of the recent impeachment inquiry.

According to Breitbart, the whistleblower’s complaint cites the OCCRP as a source at least on four occasions: first, in a footnote describing the NGO's report on Rudy Giuliani's associates' trip to Ukraine; second, when quoting Lutsenko's intent to communicate with Attorney General William Barr; third, referring to Giuliani's Skype conversation with former Prosecutor General Shokin; fourth, discussing who among Giuliani's associates may have tried to contact incoming Ukrainian President Volodymyr Zelensky's team.

While the OCCRP is looking like nothing short of a "spy" agency, Ortel notes that this is hardly surprising given what is at stake for Soros and his partners in Ukraine: "If George Soros has capital at risk in Ukraine, you can be quite sure he has the best intelligence that money can buy to alert him to opportunities, and warn him of looming risks", the Wall Street analyst emphasises.

"With Ukraine, much money can be made and lost, betting on who will profit and who may lose building out natural gas and other energy projects", Ortel says. "At present, Burisma Holdings seems to be in focus. No doubt there are other energy (and infrastructure) projects in Ukraine that deserve close analysis. Who has risked how much money on each such project? Are any of these investors over-leveraged with too much debt, and therefore especially exposed?"

According to him, in order to uncover the exact connections between the Democratic camp and Ukraine, one should look into the "details associated with each [lucrative Ukrainian] project, which may be difficult to find unless you are a government official in Ukraine".

000000
Popular comments
There are definitely more fishes in the UkraineGate than the fishy impeachment drama.

PranSa
5 October 2019, 23:01 GMT2
000000
I don't agree that the scandal has backfired - yet. Russia Gate ran for years and we still don't know how much damage that has done in the minds of America's overstressed, overfed, overmedicated voters. If nothing else it has contributed to the extreme polarization of political views and discourse in that country, shutting down the free exchange of ideas (divide and conquer). Trump's real vulnerability is the economy. He is fortunate that hand on heart American voters remain generally ignorant of just how corrupt their financial system is and that they (the taxpayers) are on the hook for the losses.
Grumpy
6 October 2019, 01:30 GMT2
000000
Newsfeed
0
New firstOld first
loader
LIVE
Заголовок открываемого материала
Access to the chat has been blocked for violating the rules . You will be able to participate again through:∞. If you do not agree with the blocking, please use the feedback form
The discussion is closed. You can participate in the discussion within 24 hours after the publication of the article.
To participate in the discussion
log in or register
loader
Chats
Заголовок открываемого материала
Worldwide
InternationalEnglishEnglishMundoEspañolSpanish
Europe
DeutschlandDeutschGermanFranceFrançaisFrenchΕλλάδαΕλληνικάGreekItaliaItalianoItalianČeská republikaČeštinaCzechPolskaPolskiPolishСрбиjаСрпскиSerbianLatvijaLatviešuLatvianLietuvaLietuviųLithuanianMoldovaMoldoveneascăMoldavianБеларусьБеларускiBelarusian
Transcaucasia
ԱրմենիաՀայերենArmenianАҧсныАҧсышәалаAbkhazХуссар ИрыстонИронауОssetianსაქართველოქართულიGeorgianAzərbaycanАzərbaycancaAzerbaijani
Middle East
Sputnik عربيArabicArabicTürkiyeTürkçeTurkishSputnik ایرانPersianPersianSputnik افغانستانDariDari
Central Asia
ҚазақстанҚазақ тіліKazakhКыргызстанКыргызчаKyrgyzOʻzbekistonЎзбекчаUzbekТоҷикистонТоҷикӣTajik
East & Southeast Asia
Việt NamTiếng ViệtVietnamese日本日本語Japanese中国中文Chinese
South America
BrasilPortuguêsPortuguese
NewsfeedBreaking
06:00 GMTRussian Scientists to Improve Efficiency in Producing Essential Building Materials
05:59 GMTChina Blasts Morrison for 'Political Posturing' as Australia Joins US in Boycotting Beijing Olympics
05:53 GMTReaders Name Brazilian President Jair Bolsonaro Time Magazine's Person of the Year
05:51 GMT'We'll Be a Bomb Target': Danish NATO Radar Flusters Faroe Islands
05:48 GMT'Cheese, Wine, No Social Distancing': BoJo Staff Joked About Lockdown Christmas Bash in Leaked Video
05:13 GMTWreckage of UK Royal Airforce F-35 Fighter Jet Raised From Mediterranean Seabed
05:01 GMTArrival of F-35s at Civil Airport Sparks Noise Concerns in Norway
04:33 GMTHouse GOP Threaten 'Disastrous Consequences' if US Removes Troops Before DPRK Denuclearises - Report
03:29 GMTNot That They Were Expected in the First Place
03:21 GMTUS Senate Rejects Resolution to Block $650Mln in Arms Sales to Saudi Arabia
03:09 GMTCharlottesville to Move Statue of Gen. Lee to Museum to Be Melted Into New Monument
03:03 GMTUS House Passes $768Bln Defense Spending Bill, Sends to Senate for Vote
02:45 GMTEx-Playboy Star Holly Madison Claims Hefner Was Abusive, 'Screaming' at Her for Cutting Hair Short
02:32 GMTUS Senate Confirms Biden Border Agency Chief Amid Immigration Crisis
02:13 GMTQueen, Her Corgis Could Be Attacked By Wolves & Bears if Royal Estates Rewilded, Tory Peer Says
00:59 GMTSmollett Becomes Aggressive During Trial When Cornered by Texts With Alleged Attacker - Report
00:45 GMTOmarova Backs Out of Biden Comptroller Nomination After GOP Attacks Claiming She’s a Communist
00:38 GMTPope Francis Compares EU’s Offer to Remove ‘Christmas’ For Inclusiveness With Fascist Rule
00:09 GMTWatch: South Korea Unveils Model for Hypersonic Weapon Prototype Days After US Blasted China’s Tests
YesterdayPutin-Biden Call: Key Points Discussed by US, Russian Presidents During Video Meeting