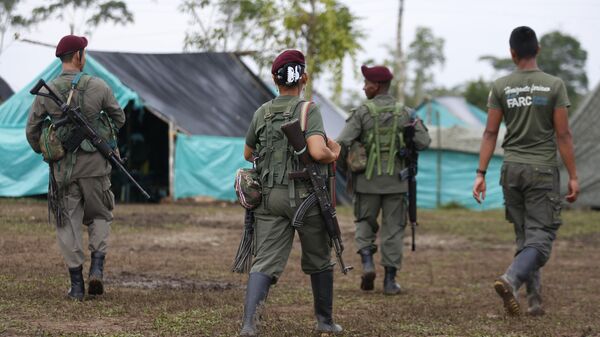 BOGOTA (Sputnik) -  Colombia’s special peace tribunal JEP said it had excluded leaders of the former rebel Revolutionary Armed Forces of Colombia (FARC) group from a system that gave them immunity.

“The commission of the Special Jurisdiction for Peace (JEP) ruled to exclude Ivan Marquez, Jose Sierra and Henry Catellanos from its jurisdiction,” the JEP representative said during a public address in Bogota late on Friday.

The JEP has already issued arrest warrants for Marquez, Jesus Santrich, another well-known FARC figure, and several other former rebels. The warrants were issued after Marquez, a key FARC negotiator in the landmark 2016 peace accord with the government, called on former rebels to return to arms in August.

FARC was founded in 1964 and was a side to a violent conflict with the government. However, the parties subsequently decided to engage in peace talks.

Before reaching the deal in 2016, they held negotiations for four years.