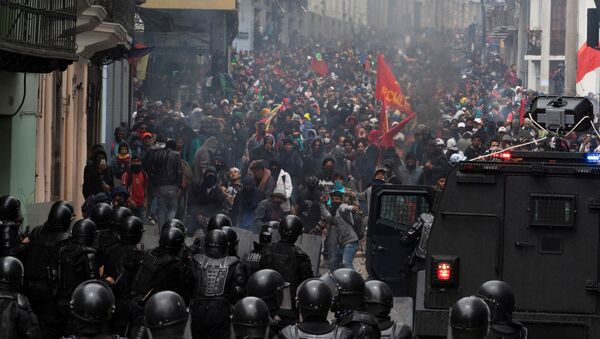 MONTEVIDEO (Sputnik) - The number of people detained during protests in Ecuador, which have erupted in response to the government's decision to cancel fuel subsidies, has reached 350, Ecuadorian Interior Minister Maria Paula Romo said on Friday.

"As of 9 a.m. [14:00 GMT], the Ecuadorian security forces over the past 24 hours have detained 350 people during the protests, most of them have been detained in Guayaquil (159 people), the second [largest number of detained people] in Quito (118 people)", she said.

Mass protests erupted in Ecuador on Thursday as thousands rallied across the country against the government's economic reforms, specifically the decision to end decades-long fuel subsidies for people.

Quito, and other parts of Ecuador are having massive protests.

Massive crowds and standoffs with police have been reported across the country.

​According to Ecuadorian President Lenin Moreno, the country could no longer afford them, and the cuts could help the country save some $2.27 billion a year. Additionally, the cuts were part of the Ecuadorian government's deal with the International Monetary Fund to be eligible for a $4.2 billion loan.

Beautiful scenes from #Quito, #Ecuador.
Students and anarchists fight alongside each other against Moreno's neoliberal policies.
Against state repression, police states and fascist regimes.
The fight has only just begun. pic.twitter.com/eWQgWBoPog