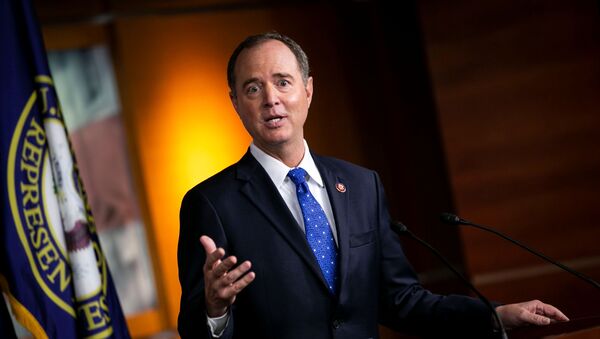 © REUTERS / ALEXANDER DRAGO
Subscribe
The House Intelligence Committee chair leading the impeachment proceedings  Rep. Adam Schiff is facing mounting criticism for both his handling of the whistleblower complaint and how he has conducted the Trump impeachment inquiry.

Schiff was ripped Thursday over the closed-door testimony of former US envoy for Ukraine Kurt Volker, the New York Post reported. Ohio Rep. Jim Jordan told reporters that Schiff wanted to limit certain members from questioning Volker, adding that Schiff had barred State Department lawyers from participating in the briefing.

“If this is how Mr. Schiff is going to conduct these types of interviews in the future,” Jordan said, “that’s a concern.”

Volker, who stepped down from his role last week, is the first witness in the congressional probe of the anonymous whistleblower complaint that included details of US President Donald Trump’s July 25 phone call with Ukrainian president Volodymyr Zelensky. On September 24, House Democrats launched impeachment proceedings against Trump, saying he sought to pressure the Ukrainian President to investigate Joe Biden's son for possible corruption. Democrats say the request amounted to an attempt to solicit foreign influence in the upcoming US election.

Earlier Thursday, Schiff was also slammed by MSNBC’s “Morning Joe” commentator Sam Stein for not disclosing that he was aware of the complaint before it was filed. Stein took issue with Schiff for not revealing in a previous September 17 interview that his committee had in fact spoken with the whistleblower.

“I will say, this puts him in some trouble. He clearly wasn’t being forthright in that interview with us a couple weeks ago. And he should have been,” Stein remarked Thursday.

In the initial interview, Schiff claimed, “We have not spoken directly to the whistleblower — we would like to,” however, it contradicts a Tuesday New York Times report that said Schiff got a heads-up about the complaint days before it was filed.

Rep. Devin Nunes, ranking member of the House Intelligence Committee, blasted the impeachment inquiry as an “orchestrated farce” due to Schiff’s handling.

“We learn from the press today that Chm Schiff had prior knowledge and involvement in the WB complaint. He withheld this info from the American people and even from the Intel Cmte. In light of this news, it’s hard to view impeachment as anything aside from an orchestrated farce,” he wrote on Twitter.