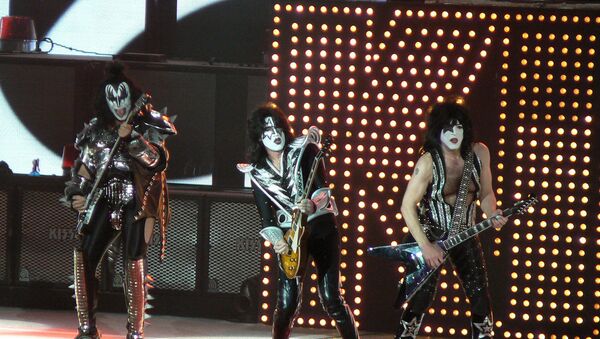 Legendary rock and roll band Kiss is planning a novel charity event off the Australian coast: a rock concert for sea life in an area known as a shark favorite.

In an event that will redefine what it means to play a concert “down under,” American rock band Kiss is planning a concert next month in shark-infested waters off the Australian coast. It’s part of a promotion by home-sharing company Airbnb dubbed “Animal Experiences,” aimed at having humans entertain wildlife instead of the other way around.

“I was a little taken aback by it, but they explained that sharks are attracted to low frequencies and so they’re attracted to rock ‘n’ roll,” singer and guitarist Paul Stanley told AP. “Since we’re going to be in Australia, it gives a whole new meaning to doing a concert down under.”

"Playing to our fans is everything to us, so hearing that great whites are die-hard rockers, we're planning a set we think they will love thrashing out to," Stanley said.

Eight lucky rockers will get to headbang to at least four Kiss songs in a small submarine while the band plays on a nearby boat and the notes reverberate through the sea from underwater speakers.

However, the guests don’t just get a concert, they get to spend a day on the water with Matt Waller from Adventure Bay Charters, shark expert Dr. Blake Chapman and of course band members Stanley, Gene Simmons, Eric Singer and Tommy Thayer, according to the Port Lincoln Times.

The event is planned for November in the South Australian town of Port Lincoln, about 150 miles west of Adelaide on the Indian Ocean. Tickets to the show cost $74 each, and the proceeds will go to the Australian Marine Conservation Society. Presumably, sharks may attend free of charge.

"I'm delighted to hear KISS will be playing their famous songs for our great white sharks in Port Lincoln on the Eyre Peninsula," South Australian Tourism Commission Chief Executive Rodney Harrex told the Times. "I'm sure the sharks will enjoy the at-sea concert, and for the humans who are lucky enough to be part of this once-in-a-lifetime experience, there are plenty of other things to do, from sampling the region's legendary oysters to checking out the amazing local wineries."