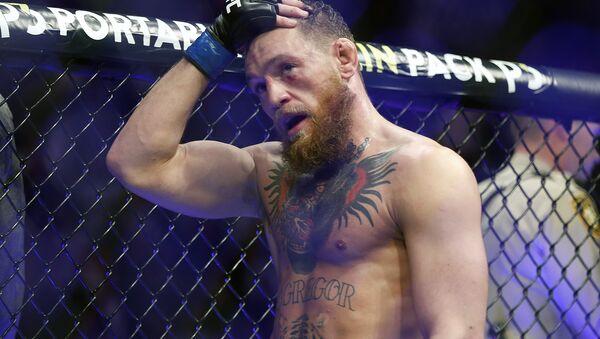 © AP Photo / John Locher
Subscribe
McGregor, the former UFC two-division champion, was formally served with a summons and is due in a Dublin court October 11 on the charge, McGregor spokesperson Karen Kessler confirmed with ESPN's Ariel Helwani.

The assault charge carries a maximum prison term of six months if convicted, a fine of $1,646, or both, according to ESPN.

In CCTV footage from the pub taken in April, McGregor is seen getting into an altercation with a senior patron of the pub after the man refused to taste McGregor’s offer of what appears to be whiskey. After a brief verbal conflict, the UFC fighter punched the old man in the head once before he was swiftly forced out of the pub by a group of witnesses. McGregor admitted later that he “was in the wrong", saying that the man had a right to enjoy his beer peacefully.

This is not the first violent incident involving the UFC fighter and a civilian. Last year, McGregor was convicted of disorderly conduct after throwing a metal trolley at a bus carrying his UFC rival Khabib Nurmagomedov. In March, the former UFC featherweight and lightweight champion was charged with strong-arm robbery and criminal mischief after stomping on 22-year-old Ahmed Abdirzak's phone in Miami, US, yet the charges were later dropped.