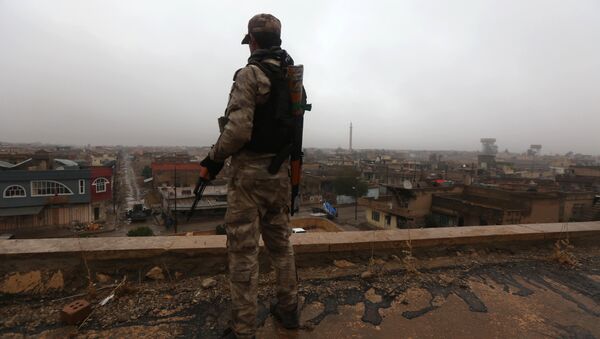 BAGHDAD (Sputnik) – Members of the Daesh* terror organization blocked off a road between the Iraqi capital of Baghdad and the city of Samarra amid anti-government protests in the country, the press service of the Iraqi security service said on Friday, adding that security officers subsequently liquidated the group.

"Late on Thursday, a group of Daesh militants managed to block off the Baghdad-Samarra road. Security services units were immediately dispatched to the site and unblocked the road, destroying the group," the press service wrote on Facebook.

The statement noted that the incident took place while the officers were "ensuring security across districts in Baghdad and other provinces grasped by protests."

The demonstrations in Baghdad and several other areas in central and southern Iraq began on Tuesday with the protesters demanding economic reforms and end to corruption.

The rallies have turned violent as law enforcement officers tried to suppress them. Early on Thursday, a curfew was introduced in Baghdad and several other regions but the violence continued.

A source in the Iraqi human rights commission said late on Thursday that 31 people had been killed and 1,188 others had been injured in the unrest.