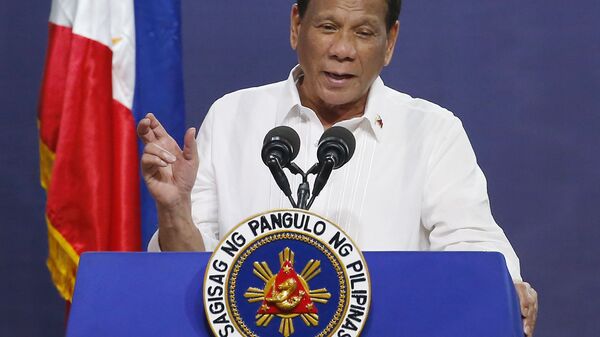 "Russia is a priority trade and investment market ... I am confident [that] economic ties will continue to prosper to their full potential," he said, addressing a business forum in Moscow.

Bilateral trade almost doubled last year to $1.2 billion with a fourfold increase in Russia’s exports to the Philippines.

The gathering of hundreds of entrepreneurs from both countries is timed to Duterte’s five-day visit to Russia, his second since he took office in 2016. Duterte earlier met with Russian President Vladimir Putin for talks and attended a discussions club in Sochi.

Duterte invited Russians to do "more business" in the Philippines and promised them a wide range of fiscal and non-fiscal incentives.

The "Build, Build, Build" program is the Duterte administration’s medium-term goal to boost infrastructure spending from 5.4 percent of GDP in 2017 to 7.3 percent by the end of Duterte’s term in 2022.

On Purchase of Russian Military Equipment

The Philippines is interested in purchasing Russian-made civilian and military aircraft, but no final decision has been made yet, Philippine Secretary of Trade and Industry Ramon Lopez said on Friday.

"President [Rodrigo Duterte] has indicated interest in some aircraft ... that can be purchased," Lopez told journalists on the sidelines of the Russian-Philippine Business Forum in Moscow.

The trade secretary, who accompanies Duterte on his five-day visit to Russia, told Sputnik that both military and civilian jets were under consideration, but "it's not final yet."

The Russian-Philippine Business Forum is currently underway in Moscow. The event is organized by the Philippines’ Department of Trade and Industry, Russia’s Chamber of Commerce and Industry and the Russia-ASEAN Business Council.

000000
Popular comments
Duterte, the president who smells good 👅 a cynical, eccentric, unstable, unpredictable, whimsical politician who has a strong desire to boot the yankees and reclaim Philippine's sovereignty, but remains forever fearful that CIA might either poison him or blast his jet in mid air. Shares symptoms with Erdogan and Imran Khan.