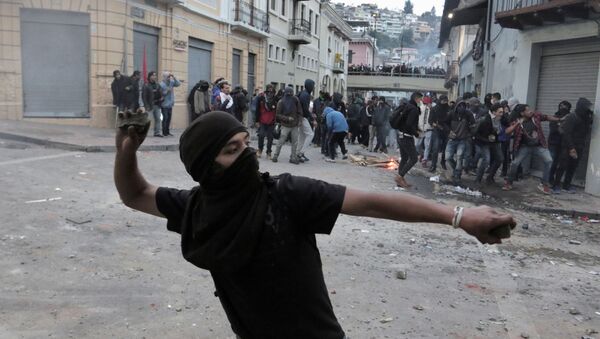 According to the president's decree, as cited by the news outlet, the 60-day state of emergency, which also went into effect on Thursday, allows the government to mobilize security forces and invoke extraordinary measures to address the civil unrest.

By late Thursday, 275 people had been arrested and 28 police officers hurt, the Interior Ministry said.

​On Wednesday, Economy Minister Richard Martinez said that the government hoped that the fuel measure, which is expected to more than double gas prices, would save the Latin American country about $2.27 billion a year.

​Prior to that, the Ecuadorian government announced that it would be eliminating fuel subsidies as part of a deal reached with the International Monetary Fund in February to obtain a $4.2 billion loan.

The measure also includes a reduction of vacation days for public employees, changes to retirement benefits and lower compensation for some contract workers. On Thursday, after the measure went into effect, violent protests erupted nationwide, with taxi, bus and truck drivers blocking roads and bridges in Quito and clashing with police.