Why is Niger "Africa’s Champion" in Foreign Military Presence? 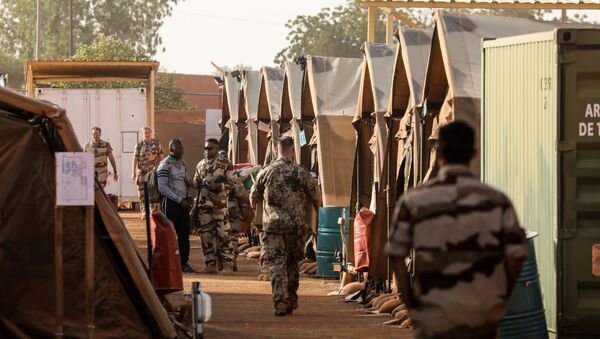 © AFP 2022 / LUDOVIC MARIN
Subscribe
Former colonial power France has had troops in the country for years and the United States has a strong presence in the region. But Niger has also seen troops from Germany, Italy, Canada, and more recently, the United Arab Emirates, deployed on its territory, ostensibly to combat terrorism.

Niger has had growing problems repelling the terrorist threat on its eastern, western and southern borders; in June, the government decided to renew a state of emergency in the regions of Diffa, Tillabéry and Tahoua. And since the fall of the Muammar Gaddafi regime in Libya in 2011, the border area with Libya is particularly at risk.

To combat the terrorist threat, soldiers from Canada, Italy and Germany, as well as from France, are deployed in Niger. Officially, French troops returned to Niger in 2010 after the employees of the Areva nuclear company were taken hostage. The French military presence in Niger intensified in 2014 due to the deployment of forces involved in Operation Barkhane in Mali, from where military operations are regularly conducted against jihadists that often cross the border between Mali and Niger.

On 30 August 2019, Nigerian President Mahamadou Issoufou ratified an agreement with Germany on strengthening the long-standing military cooperation between the two states. In 2016, Niger allowed Germany to build an airbase in Niamey to carry out operations to combat jihadists in neighbouring Mali.

In June of this year, Niger and the UAE also ratified an agreement on the deployment of a military base in the Agadez region, in the north-west of the country, 800 kilometres from the border with Algeria. The US military is already present in this region. This became public in October 2017 after four American soldiers were killed. In 2018, it was in this region that the Americans started building the “201” airbase, which, according to preliminary estimates, should be completed by 2024. According to the Intercept website, building the facility will cost $4 billion.

But despite the foreign military presence in the country, the terrorist threat is far from being extinguished, leading to protests throughout the country demanding the departure of foreigners.

Paradoxically, an increase in the number of foreign military in Niger doesn’t contribute to a reduction in terrorist attacks in the country. Since January 2019, 179 people have been kidnapped in Diffa. Given the critical situation, the international NGO Doctors Without Borders announced in August that it was closing down its activities in Maine Soroa due to a “security threat”; however, the NGO continued operating “in Diffa, Maradi, Tillabéri and Magaria.”

Algerian political analyst Tewfik Hamel, a specialist in military history and defence research at the Paul Valéry University of Montpellier. has tried to explain the motives behind the deployment of so many foreign troops in the country.

Sputnik: On 23 July, the US administration announced the expansion of its military base in Agadez with deploying drones there. The Americans will invest $280 million in expanding the base. How can the increased American presence in Niger be explained?

Tewfik Hamel: The American presence in Niger, as in other African countries, is one aspect of the “water lily strategy.” The cornerstone of this strategy is the conclusion of bilateral military agreements with many developing countries in order to have access to various types of bases. This provides as much flexibility as possible in military operations. The logic is simple – one needs to increase the number of bases from which operations can be carried out regardless of the current situation. The Pentagon wants to be able to transfer its contingent to any remote or strategic region where military operations are conducted.

It should be noted that the United States seeks to expand the geography of its inconsistent presence by developing a network of objects called CSL (Cooperative Security Locations). Here we are talking about facilities that host units of military equipment, as well as contracts under which the US can easily access these facilities. American forces aren’t constantly deployed at such CSL facilities. These bases allow you to organise urgent operations, as well as allow the US military to conduct joint exercises with Allied forces.

Sputnik: In Niger, there are airbases that host drones. Does this mean that the United States has changed its concept of deployment?

Tewfik Hamel: Since 2007, when Africom, the African Command of the US Armed Forces, was created, the United States has built more than a dozen such air bases in Africa. If we compare the US strategy of the 1990s with the current one, the difference is that the deployment of their troops no longer serves the desire for territorial expansion. Today, the United States is looking for small objects that they need to establish their imperialist power. It’s not the size of the military base that is important, but the speed of response.

Today, Americans need airbases for drones and F-15s takeoffs and landings to assert their power. The Pentagon has such air bases in Qatar, the UAE, Niger, Ethiopia, Djibouti, the Seychelles, etc. Today, the American empire no longer needs vast territories, colonies dependent on it, or puppet governments; what they need is many facilities where soldiers and military aircraft can spend the night.

Sputnik: Having established its presence in Eritrea, Somalia and Libya, the UAE signed an agreement with Niger in June 2019 to deploy a military base there. In your view, what is the interest of the Gulf countries in the Sahara-Sahel region?

Tewfik Hamel: In my opinion, this is, above all, the most important political deal, which will have bilateral, international, cultural and economic consequences. It seems that the current goal of the United Arab Emirates is Libya. The presence of the Gulf countries in the north of Niger gives them an opportunity to support their ally in the person of Marshal Khalifa Haftar.

From Benghazi, he leads the Libyan National Army and seeks control over the entire Libyan territory. As a result, the rivalry between the two blocs is escalating: the UAE, Saudi Arabia and Egypt on the one hand, and Turkey and Qatar on the other. Ankara and Doha support Tripoli, with Fayez al-Sarraj’s government of national unity (recognised by the international community).

Sputnik: The UAE seems to be interested not only in Libya but also the Maghreb and Sahel countries.

Tewfik Hamel: Any country’s foreign policy always pursues several goals. Therefore, the desire of Tunisia and Algeria for a stable democratic system doesn’t meet the interests of the United Arab Emirates. It is not news that there is little in common between the Maghreb countries and the Gulf States. The deployment of the UAE military in Niger fits into the wider context of the collapse of the regional Arab system and indicates a return to previously concluded alliances and agreements; and this happens at a time when the situation in the region is unstable and the enemy suddenly becomes an ally, or vice versa.

The United Arab Emirates wants to be positioned so as to be able to take part in the transformation of the regional system. This new military base in Niger can become a trump card in their relations with the United States and France; and, if necessary, it can help the US in military-strategic plans.

Sputnik: Germany has just ratified a treaty with Niger to strengthen its military presence there. Since 2010, the presence of foreign armed forces has been growing in Niger. Why is Niger so attractive to the West?

Tewfik Hamel: This military presence also demonstrates the Western powers’ burning interest in Africa. It’s not only about combating terrorism and securing access to natural resources, but also about opposing China and Russia’s strategies for penetrating the continent.

In October 2016, Germany announced the start of the construction of an air transport base in Niamey to support MINUSMA (United Nations peacekeeping) operations. A year later, they invested €27 million in military support for Niger, which includes developing the necessary infrastructure, training, consulting and equipping the country’s military.

Sputnik: Is G5 Sahel (the union of the countries of the Sahara-Sahel region, which includes Niger formed on the initiative of France) supporting the above powers, or is it acting as a rival?

Tewfik Hamel: The G5 is just one aspect of France’s strategy in Africa. In fact, the G5 is nothing more than the actualisation of old imperialist techniques related to the tactics of fighting the rebellious local population. This alliance has been widely touted to make nations accept the G5. There was a brilliantly organised propaganda campaign with some articles devoid of any critical assessments in relation to the G5 structure, which was presented as a tool to defeat terrorism and restore peace. The Sahel G5 alone doesn’t make any sense if France’s goal is to participate in the creation of democratic liberal states in the Sahara-Sahel region.

Before the spread of democratic ideals, terror served as a tool to suppress riots against the colonialist. It’s tempting to resort to terror today. But in modern times, when democratic humanism is proclaimed, episodic pogroms are unacceptable. Therefore, it’s necessary to develop a number of strategies where strength, persuasion and generosity take place. G5 is one of these strategies.

Sputnik: Do you think that France, which deployed 4 military bases in Niger, has lost control of its former colony?

Tewfik Hamel: France’s influence in Niger is still strong. However, new players have emerged, including the United States, China and Russia, whom France should take into account; but its influence is still significant. France’s military presence in the Sahel is one aspect of this strategy. Due to France’s military intervention in Libya, the interest in Niger is growing. The G5 is one of the components of a broader tactic, the purpose of which is for France to be able to rely on countries that need its help in strengthening their security forces.

Through the G5, France seeks to have multilateral partners in order to legitimise its presence in Africa on the one hand, and to share costs of about €400 million between G5 participants on the other. To do this, the country is developing the ability to conduct operations in such a way as to avoid large-scale operations. Basically, France uses the services of consultants and partners that train, supply weapons, etc.

Sputnik: In your opinion, why is Niger so attractive to foreign military powers? What is the real geopolitical weight of this country?

Tewfik Hamel: Niger has the largest reserves of minerals among countries located south of the Sahara. Niger’s natural resources include uranium, coal, gold, iron, tin, phosphates, oil, molybdenum, salt and gypsum. The country is the world’s third-largest uranium producer, after Canada and Australia, with uranium export being 70% of the country’s total exports.

Apart from economic, there’re other reasons for the deployment of foreign powers in Niger. These countries seek to isolate Algeria and do not want to allow it to establish closer ties with the Sahara-Sahel countries. Algeria continues operating independently in the international political arena; this country is an indispensable, but also difficult partner. For example, the United States sees Algeria as a “wilful” state. Harnessing Algeria seems important to foreign powers in Africa; and this is at a time when the number of powerful players on the African continent is growing. Russia is developing a strategic partnership with Algeria, and China intends to offer its participation in the development of the new Silk Road.