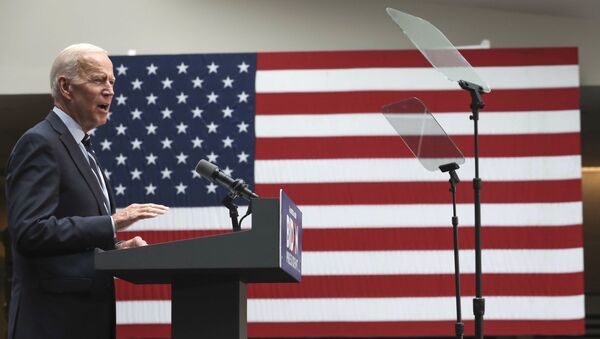 Oleg Burunov
All materialsWrite to the author
The ongoing impeachment proceedings against Donald Trump were announced after a whistleblower raised the alarm over the US President’s phone conversation with Ukrainian President Volodymyr Zelensky. Trump has already slammed the impeachment inquiry as a “hoax” and a “coup”.

Former Ukrainian Prosecutor-General Viktor Shokin had to back off a probe pertaining to a natural gas firm linked to former US Vice President Joe Biden’s son “out of fear of the United States”, Fox News reports, referring to Shokin’s January 2019 private interview with President Trump's personal attorney Rudy Giuliani.

“Mr. Shokin attempted to continue the investigations but on or around June or July of 2015, the US Ambassador Geoffrey R. Pyatt told him that the investigation has to be handled with white gloves; according to Mr. Shokin, that implied: 'do nothing',” according to Guliani’s notes from the interview, a copy of which was obtained by Fox News.

Additionally, the notes argued that Shokin was told Biden had suspended US aid to Ukraine over the investigation, adding that after Shokin was fired in April 2016 over corruption allegations, his case was “closed by the current Prosecutor General Yuriy Lutsenko”.

Speaking to Fox News, Giuliani said the notes of the interview were gathered before Biden announced his presidential run in late April 2019.

"I explored them as part of my duty as an attorney to show that the crimes committed, were not by my client, but by Democrats. I was not seeking to investigate Joe Biden. I was not investigating Joe Biden,” Giuliani pointed out.

He expressed regret over the fact that after he brought the documents to the State Department, they were not investigated, adding, “maybe they will now”.

The proceedings were commenced following a complaint by an anonymous whistleblower who is thought to be from CIA's ranks, alleging that Trump had abused his power in the 25 July conversation with his Ukrainian counterpart Volodymyr Zelensky.

The complainant claimed Trump had "pressured" Zelensky into initiating an investigation into former US Vice President Joe Biden.

The released transcript of the conversation revealed that Trump only asked Zelensky to look into allegations that Biden had pressurised the previous Ukrainian administration into sacking prosecutor Viktor Shokin, who was investigating Biden's son, Hunter, in a criminal case. The transcript revealed no evidence that the US president had applied any leverage against Zelensky.

Trump, for his part, dismissed the accusations against him and stated that his conversation with the Ukrainian President was "pitch perfect". He labelled the impeachment probe a “hoax” and a “coup” which he claimed is aimed to “take away the power of the people” as well as their “freedoms and their God-given rights as a citizen of The United States of America”.