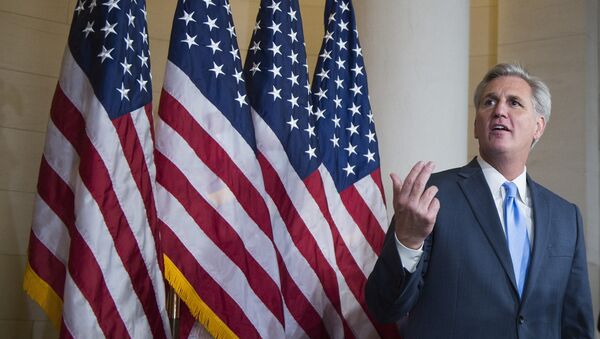 WASHINGTON (Sputnik) - US House Minority Leader Kevin McCarthy on Thursday sent a letter to Speaker Nancy Pelosi asking her to suspend the impeachment inquiry into President Donald Trump until equitable and transparent rules are established to govern the probe.

"I am writing to ask you suspend all efforts surrounding your ‘impeachment inquiry’ until transparent and equitable rules and procedures are established to govern the inquiry, as is customary," McCarthy wrote.

McCarthy pointed out that Pelosi has given no clear indication as to how the impeachment inquiry will proceed, including whether key historical precedents or basic standards of due process will be observed.

"The swiftness and recklessness with which you have proceeded has already resulted in committee chairs attempting to limit minority participation in interviews, calling into question the integrity of such an inquiry," McCarthy said.