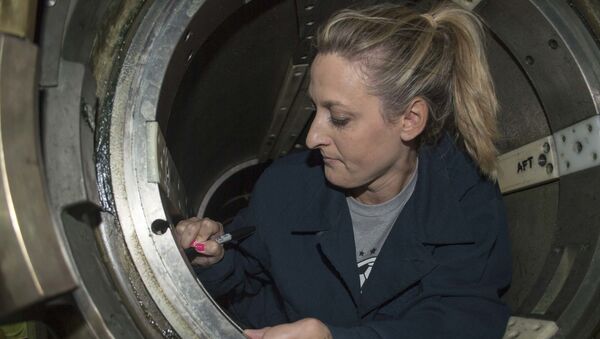 Captains of US Navy submarines will once again be able to yell “man the torpedoes!” After abolishing the job title in the 1990s, the service is bringing the rate of torpedoman’s mate back in the hopes it will “renew the heritage and pride" of sailors who, well, man the torpedoes.

“The Torpedoman’s Mate rating was disestablished in 1995, but based on feedback from the fleet we are bringing it back,” Capt. Angela Katson, branch head of Enlisted Force Shaping Plans and Policies, said in a September 30 press release by the Navy. “In the spirit of heritage, and Sailor 2025 initiatives, we are returning to the use of the original Torpedoman’s Mate rating badge.”

About 1,100 submariners will be affected by the move, the Navy Times noted. When the Navy abolished the torpedoman’s mate rate, the task didn’t cease to exist - those who had been TMs were renamed as machinists mates (weapons), abbreviated MMW, but continued to maintain weapons on the boats.

Sailor 2025 was rolled out in 2016 amid problems with staffing, sailor retention and morale. According to Surface Warfare Magazine, the program is “focused on three core pillars – Personnel System Modernization; Ready, Relevant Learning (RRL); and Career Readiness.” US President Donald Trump’s push to expand the size of the Navy from 287 ships to 355 by 2034 places increasing pressure on the service to retain its trained crewmembers.

However, the Navy has shown historically low levels of morale in recent years. A December 2014 survey of 2,300 active-duty US troops by Military Times titled “America’s Military: A Force Adrift,” found “morale indicators on the decline in nearly every aspect of military life.”

“Troops report significantly lower overall job satisfaction, diminished respect for their superiors, and a declining interest in re-enlistment now compared to just five years ago,” Military Times noted. “Today's service members say they feel underpaid, under-equipped and under-appreciated, the survey data show. After 13 years of war, the all-volunteer military is entering an era fraught with uncertainty and a growing sense that the force has been left adrift.”

That problem has only swelled in years since, and direct connections were found by naval investigators between the “catastrophic morale” among sailors and the collisions suffered by two US Navy destroyers in the Pacific in 2017.

“It feels like a race to see which will break down first,” one sailor wrote in a command climate survey of the US 7th Fleet in the months after the crashes, “the ship or it’s [sic] crew.”

“I think the Navy bringing back the TM rating is going to pay incredible dividends,” MMWCS Heath Mangrum, the force torpedoman at Commander, Submarine Force Atlantic, said in Monday’s press release. “The excitement level amongst the Sailors is through the roof. It’s the right time for a change like this to light the fire under our Sailors, and embrace the heritage in the rating.”

“The importance of a TM stems far beyond namesake,” Mangrum continued. “When the commanding officer is calling for a ready weapons posture, the TMs make sure all systems are locked, loaded and ready to go.”