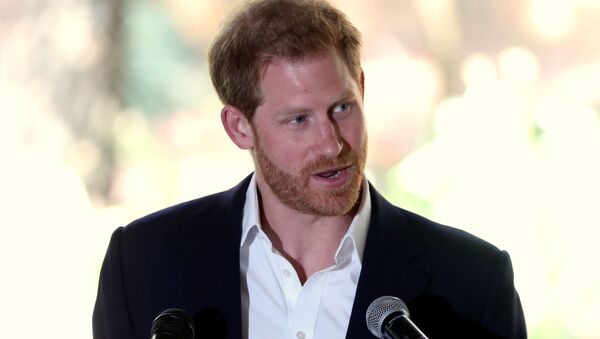 © REUTERS / SIPHIWE SIBEKO
Subscribe
As Harry sought to take action against the Daily Mail over their coverage of his wife’s private correspondence, it appears that his aides warned him that making such a statement might not be a good idea.

The recent actions of Prince Harry aimed at DMG Media, the company that publishes the Daily Mail tabloid, over its handling of a personal letter from his wife, Meghan Markle, to her father, were apparently made against the advice of some of his most senior aides, The Times reports.

News of this development comes as the Duke of Sussex filed a lawsuit against the publisher,  while conducting his official tour of southern Africa and declaring his intentions via a statement posted on a recently created website.

According to the newspaper, Harry went on to have the statement released even as advisers warned him that it would  “inevitably push the tour itself off the news agenda,” leaving royal aides “visibly embarrassed… amid the fallout from the duke’s unprecedented intervention”.

The prince also reportedly didn’t notify his father Charles and brother William about this move, as they learned about it only after Harry’s statement was published, with the Daily Mail noting that Buckingham Palace hasn’t yet responded to these claims.

Also, it appears that Meghan Markle is being represented by law firm Schillings in this affair, instead of “the royal firm of choice Harbottle & Lewis who have recently worked on cases for both Harry and William.” This was seemingly done because the lawsuit was “intended to separate it from the duke’s official activities,” the Times points out.

“The Mail on Sunday stands by the story it published and will be defending this case vigorously,” a spokesman for the newspaper said in response to the prince’s accusations. “Specifically, we categorically deny that the Duchess's letter was edited in any way that changed its meaning.”

Earlier, Prince Harry announced the launch of legal proceedings against the Mail on Sunday and its parent company “over the intrusive and unlawful publication of a private letter written by the Duchess of Sussex” which he described as a “part of a campaign by this media group to publish false and deliberately derogatory stories about her, as well as her husband.”

The prince also drew comparison to the tragic fate of Diana, the Princess of Wales, lamenting how he lost his mother and now watches his wife “falling victim to the same powerful forces.”