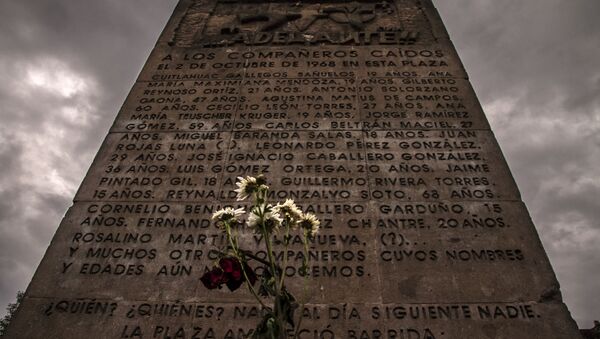 © Photo : Eliana Gilet
Subscribe
International
India
Africa
MEXICO CITY (Sputnik) - Mexico is holding events to commemorate the October 2, 1968, massacre when the army opened fire on student protesters on the Plaza of Three Cultures in Mexico City, with the government and businesses voicing concerns that the anniversary rallies might turn violent.

"We will remember the October 2 events and the fact that the use of force is not a solution to problems arising from lack of freedom and injustice. We are at a new stage and no longer allow the use of force [against the people], even when it comes to the protection of state interests," Mexican President Andres Manuel Lopez Obrador said in a speech, broadcast on Twitter.

At the start of its meeting earlier in the day, the Mexican Senate observed a minute of silence in memory of the victims, while the Chamber of Deputies flew the flag at half-mast.

Mass student rallies began in Mexico in summer 1968 following the police crackdown on a demonstration. It all came when Mexico City was preparing to host the costly Olympic Games from October 12-27.

Participants of the October 2, 1968, rally planned to start their protest on the Plaza of Three Cultures in the Tlatelolco area of the capital, however, exits were blocked by the armed forces. At the time when student leaders announced the cancellation of the march to avoid violence, shots broke out. It is still unknown who started shooting, as well as how many people were killed and injured as a result.

According to the Mexican president, the 1968 student movement "was not in vain," as it launched the process of change in the country, which today demonstrates the results of this transformation.

Mexico's main universities have scheduled strike for Wednesday and intend to join the commemorative march, which will set off from the Plaza of Three Cultures to Zocalo Square, where the 1968 tragic events took place.

Though organizers declare the peaceful nature of the march, rejecting violence and vandalism, the owners of shops, hotels and cafes are bracing for manifestations and possible aggression.

Shop windows in the city’s historic centre, as well as monuments, bus stops and doors of the National Palace have been shielded with wooden slabs. Central metro stations, as well as public institutions, will also be closed during the march.

According to local authorities, 2,500 police officers will ensure the safety of demonstrators.

The committee 68, which is in charge of the rally, has urged the authorities to guarantee the freedom of speech and assembly for demonstrators without police cordons.

Lopez Obrador has pledged that the police will be cautious in ensuring proper security to not succumb to provocations.