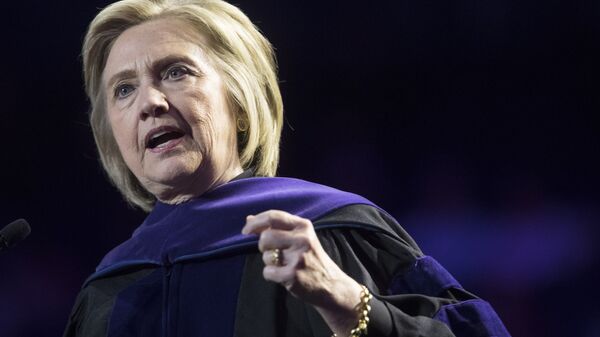 © AP Photo / Mary Altaffer
Subscribe
International
India
Africa
Even though Meghan McCain and Hillary Clinton remain on opposite sides of the political spectrum, they have finally found something to vocally agree on – the presumption that Julian Assange is a cyberterrorist and the claim that WikiLeaks serves Russian intelligence.

During a wide-ranging interview with Clinton and her daughter Chelsea on The View to talk about their book called “The Book of Gutsy Women,” Clinton was quick to switch to her favorite topics: calling Trump “an illegitimate president,” slamming him as “someone who has to dominate and be the only voice in the room” and finally, blaming WikiLeaks for her loss during the last election.

McCain, who used to call Clinton “crooked” in previous shows, then asked whether she is “concerned that WikiLeaks and Facebook could end up influencing voters and tipping the scales again” in the 2020 election. The 2016 Democratic presidential candidate answered with a yes, claiming that “WikiLeaks became an instrument of Russian intelligence,” driving McCain to ecstasy as she yelled “Thank you for agreeing with me!” across the table.

Clinton said that she’s “with” McCain on her recent fight with Pamela Anderson about Julian Assange. “WikiLeaks became an instrument of Russian intelligence,” she said. “It was not an independent, whistleblowing, transparency-promoting organization.” Clinton said that while WikiLeaks was outright malicious, “Facebook was careless” in the lead-up to the 2016 election.

This is not the first time the former presidential candidate has attacked WikiLeaks: Clinton claimed earlier that her 2016 presidential run had been "stolen" from her following Julian Assange's Wikileaks release of thousands of DNC documents, despite singlehandedly forcing Democratic candidate Bernie Sanders out of the contest and having multiple investigations launched by former FBI chief James Comey, who probed the candidate's use of private email servers for sharing classified content. US special counsellor Robert Mueller has also stated in his report that US President Donald Trump had not colluded with Moscow and that no "broader conspiracy" had affected the outcome of the elections.