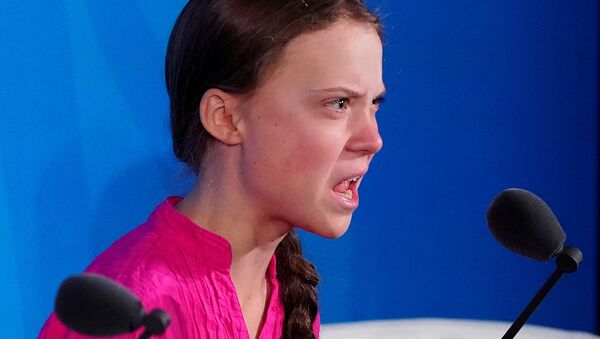 In his speech, Putin remarked that no one apparently explained to Greta how complex and diverse the modern world is, and how problematic it would be for some African and Asian countries to switch to solar power, for example.

Teenage climate activist Greta Thunberg has adjusted her bio on Twitter, setting it to “A kind but poorly informed teenager,” seemingly in response to remarks recently made by Russian President Vladimir Putin about her.

During his speech at a plenary session of the Russian Energy Week, Putin said that he is “convinced that Greta is a kind and very sincere girl,” but argued that it is wrong to use children and teenagers to promote even noble goals, adding that he doesn’t “share the general enthusiasm about Greta Thunberg’s speech.”

"After all, no one has explained to Greta that the modern world is complex and diverse, and is developing rapidly. People in Africa or in many Asian countries want to live at the same standards as in Sweden. And how is this done? Should they now start using solar energy, of which there is plenty in Africa? Has anyone explained to her what it costs?" Putin inquired.

Commenting on this development, some netizens appeared puzzled by Greta’s new Twitter bio.

Did someone hack Greta's twitter? Why do I read on her profile "A kind but poorly informed teenager"???

Did Greta Thunberg really call herself "A kind but poorly informed teenager"? Twitter, what gives here? I'm amazed by the vitriolic comments to her recent postings. pic.twitter.com/1oJEfjeXPK

​Many others voiced their agreement with Putin on the matter.

That awkward moment when Putin is 💯 correct... pic.twitter.com/SPHrlM7nis

Hate him or love him. He's right. Europe and the US were able to industrialize and develop while polluting the environment for CENTURIES. Now that they're at the top, everyone else's path to development has to be more expensive because "the earth is dying."

WOW! Honestly? WOW! Whether knowingly, cunningly or whatever, Vladimir Putin nailed it in his observation of @GretaThunberg. I think the adults who put this child up to such, should be charged with child abuse.

A number of people joked about the description of Greta as “kind”.

She looks very kind to me: pic.twitter.com/pl1pzNbbUx

I've no idea what gave him the impression she is kind.

And there were also those who opted to attack Thunberg’s critics instead.

Russia‘s economy is based on gas&oil, so Putin’s statement is not a big surprise. But interesting how scared the establishment is about Greta. She is recognized to be a danger for them.

Or is it oil/gas lobby speaking ? pic.twitter.com/sAlARQF1Kf

Earlier, Greta Thunberg responded to Donald Trump’s remarks regarding her in a similar fashion, setting her Twitter profile to “A very happy young girl looking forward to a bright and wonderful future” after the US president described her as such.