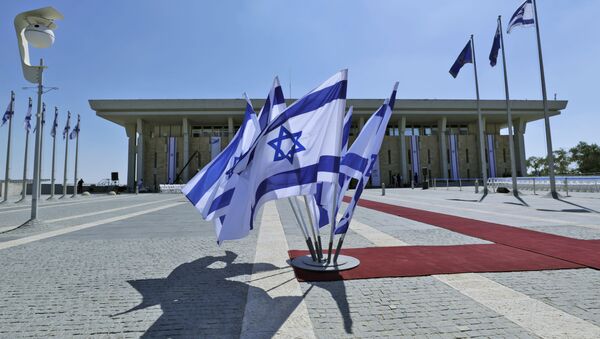 Oleg Burunov
All materialsWrite to the author
In an address to Israeli MPs earlier this day, Israeli Prime Minister Benjamin Netanyahu pointed to the necessity of forming a “broad national unity government” as soon as possible, saying that no other country is challenged “as much as we are.”

Speaking to lawmakers during the swearing-in ceremony of the 22nd Knesset on Thursday, Israeli President Reuven Rivlin specifically underscored that there are moments in which he is obliged to meddle so as to put the country’s political system back on track.

He specifically referred to the results of last month's election in Israel, confirming his drive to see a unity government lead the country. 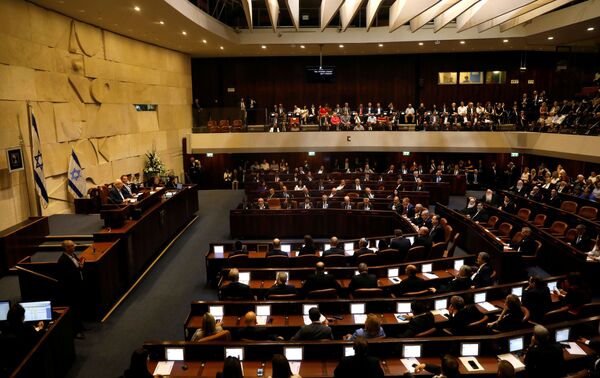 “The results of this election are a badge of honor for Israeli society. It is a red card that the citizens of Israel showed to their elected officials. It is a red card to populism, to a political style that feeds off the schisms [in our society] and sees in all of our fears a resource to mine,” Rivlin emphasised.

He recalled that his call for a broad government caused criticism “from both the right and the left” and that he is “attuned to this legitimate criticism” which Rivlin said is “in many ways justified.”

“And yet, there are singular moments in the life of a people, when a president is required […] to intervene and act to recalibrate the system which is struggling to get back on track”, he pointed out, adding that his power is “limited” and that he “can only try to mediate.”

He claimed that Israel currently faces “a time of emergency” related to the country’s security, society and democracy and that only a unity government “would allow us all to breathe a little and heal.”

Separately, Rivlin warned the lawmakers of the repercussions from Israel possibly holding a third election later this year.

“An election is the most expensive reality show in town. You must remember that from season to season the ratings may plummet, while the outcome stays the same,” he said.

Rivlin was echoed by Prime Minister Benjamin Netanyahu who stressed the need to form a “broad national unity government” in order to prevent a third round of elections in less than a year.

Referring to the country’s prolonged political gridlock, he said that “we are not the only ones who suffer from this problem” and that “we cannot let ourselves suffer [from] this problem.”

“No one is as challenged as much as we are, no other country. And democracies that haven’t understood that you need to unite at time of danger suffer a heavy price,” Netanyahu noted.

He also pointed to Israel facing a spate of major security challenges, such as Iran, something that Netanyahu said justifies the formation of a broad government.

“This isn’t spin, it’s not a whim, this is not ‘Netanyahu trying to scare us,’” he added.

He even went further by referring to Elvis Presley when calling for the speedy creation of a new government.

“I’ll quote an Elvis Presley song: ‘It’s now or never.’ But I’ll amend it a little — it’s now or later. The right thing to do now is to [finalise a unity government]. But if we don’t do it now, then [we’ll still have to do it] after I return the mandate, and [Blue and White alliance head] Benny Gantz returns the mandate, and the final 21 days pass […],” Netanyahu said.

His remarks came after the Anadolu news agency cited an unnamed Israel official as saying that Netanyahu and the head of right-wing Yisrael Beytenu party Avigdor Lieberman failed to clinch a consensus on forming a coalition government on Thursday.

Earlier, Lieberman said that he would push to “establish a unity government with the three parties, including Yisrael Beiteinu, Likud and Kahol Lavan”.

According to the 17 September parliamentary election results, the Blue and White coalition managed to obtain 33 seats in the Knesset, followed by Netanyahu’s Likud party with 32 seats.

The election became the second such event this year after Netanyahu failed to form a government after the April parliamentary polls.

The collapse of the coalition talks come amid the pre-trial corruption hearings against Netanyahu who specifically faces charges in line with probes known as cases 1000, 2000 and 4000.

In Case 1000, Netanyahu and his wife are accused of accepting expensive gifts from wealthy supporters I n return for advancing their interests.

Case 2000 looks into allegations that Netanyahu arranged to obtain favourable coverage from the popular newspaper Yedioth Ahronoth in return for creating problems for its rival, the Israel Hayom, the free newspaper owned by American casino mogul Sheldon Adelson.

And Case 4000, known as the Bezeq affair, pertains to suspicions that while working as communications minister in 2014-2017, in addition to his prime ministerial post, Netanyahu allegedly helped the Israeli telecom giant Bezeq, controlled by Shaul Elovitch, in exchange for a beneficial image of Netanyahu and his policies in the media.

The Israeli Prime Minister vociferously denies all the accusations, describing himself as a victim of a politically motivated “witch-hunt” staged by the media and the left in order to force him to resign.