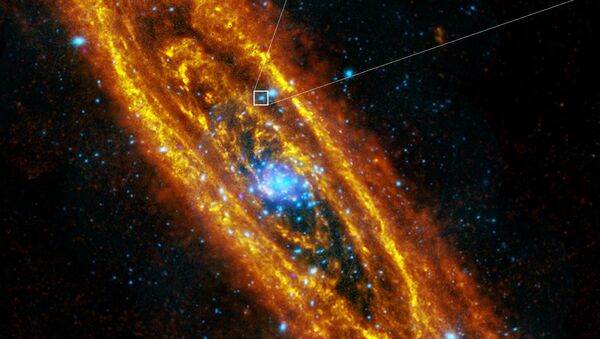 © Photo : ESA/Herschel/PACS/SPIRE/J. Fritz
Subscribe
According to research recently published in Nature, the Andromeda galaxy has been discovered to have a violent past and quite an appetite, as it has devoured several smaller galaxies over the past few billion years. Astronomers predict that the Milky Way might become another star “dish” on its menu in 4 to 5 billion years.

Astronomers have discovered evidence that the Andromeda galaxy, located next to the Milky Way, already has several mass-eating events under its belt. A study co-led by Dr. Dougal Mackey from Australian National University and published in the recent edition of the journal Nature has discovered that Andromeda first went on a galaxy-eating frenzy about 10 billion years ago as it was forming. Six billion years later, another fatal feast occurred, along with a number of smaller events.

The astronomers recreated Andromeda’s ravenous past and theorised how it was formed as they studied its stellar halo.

They discovered that its so-called globular clusters of stars, bound gravitationally, orbits at a right angle, which let them conclude that these structures came from different sides and at different times.

"We know that galaxies like Andromeda and the Milky Way were embedded in this thing called the cosmic web — it's like this sponge-like structure of galaxies and material around us and objects fall into our galaxy from this web… There's a big feed from one direction, then another feed from another direction," Professor Geraint Lewis from the University of Sydney, who also co-led the study, told the ABC.

The researchers are said to be enthusiastic about the discovery, as it gave them an opportunity to have a look at the history of our Milky Way, which is similar to Andromeda. However, the eating habits of the neighbouring galaxy might be bad news for ours, which happens to be on a collision course with the gluttonous Andromeda and is destined to clash with it in about 4.5 to 5 billion years. As the researchers, cited by the Australian broadcaster ABC, point out, they are unsure which galaxy would be devoured by its neighbour.

"What we know about Andromeda is that it's roughly the same size as the Milky Way, both in terms of distances and in terms of mass. The Milky Way is a spiral system; you may see pictures of that type of galaxy that's flat like a dinner plate with spiral arms, and Andromeda is a very similar system in that sense," Mackey told the broadcaster.

The theory that this collision would be a fair fight means a loss for both spiral galaxies, according to Lewis, as the mutual gravitational pulls of the similarly-sized Milky Way and Andromeda galaxies are going to tear them apart and create “a new single - much larger — featureless galaxy.”

The scenario for the Sun and, respectively Earth, might also be grim. Although the astronomers suggest that one unlikely but remotely possible outcome is that out star might be thrown away out of the newly-created galaxy.

"It's possible that the Sun could be thrown out of the merged Andromeda and Milky Way system by the collision, into intergalactic space, and/or a nearby close passage with another star could perturb the Earth's orbit such that the Earth can no longer support life,” Mackey explained.

While this mayhem is said to be billions of light-years away from us, the discovery that Andromeda has two well-defined orbits contradicts our existing understanding of gravity as one of the four natural forces.

“They (some astronomers) are saying we've actually got gravity wrong, rather than this being an indication that we understand what's going on with galaxy evolution. It may tell us more about the distribution of dark matter, but the presence of ordered motion does sort of worry some people that we have gotten something wrong somewhere," Lewis explained.