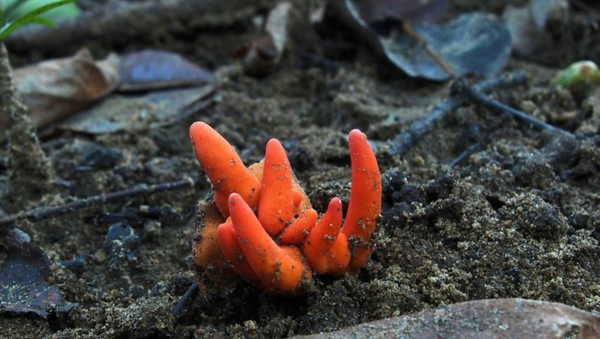 One of the world’s deadliest species of fungus was recently confirmed to have surfaced in an undisclosed location within a heavily forested area near Australia’s Cairns, a newly filed report revealed Thursday.

The discovery of Poison Fire Coral was confirmed by James Cook University’s Matt Barrett, an expert who specializes in fungi studies, after the official was able to review images provided to him by photographer Ray Palmer.

Poison Fire Coral is typically found in the mountains of Japan and the Korean Peninsula, with a few cases of it sprouting up in Papua New Guinea and Indonesia, according to the university’s release.

However, in Australia, the fungus was found by Palmer in Redlynch, a suburb of Cairns, around the roots and soil of a tree that appeared to be dying. Speaking to the Cairns Post, Palmer credited his 10 years’ worth of fungi photography for his shocking find.

“It was all around a very big, dying tree,” Palmer told the outlet, before noting that he hasn’t disclosed the exact location of the fungus due to its dangerous nature. “It’s in the wild, and it’s in a spot where even the ordinary bushwalker wouldn’t come across it.”

Due to its toxicity, experts have longed urged individuals to steer clear of the species in the event that they come upon it. Barrett noted in the university’s release that “if found, the fungus should not be touched, and definitely not eaten.”

“Of the hundred or so toxic mushrooms that are known to researchers, this is the only one in which the toxins can be absorbed through the skin,” reads the statement, pointing out that the fungus produces at least eight toxic compounds that can be absorbed.

“Just touching the Fire Coral fungus can cause dermatitis (reddening or swelling of the skin). If eaten, it causes a horrifying array of symptoms: initially stomach pain, vomiting, diarrhea, fever and numbness, followed over hours or days by delamination of skin on face, hands and feet, and shrinking of the brain, which, in turn, causes altered perception, motion difficulties and speech impediments.”

If left untreated, death typically occurs as a result of multiple organ failure or brain nerve dysfunction, according to Barrett.

The Cairns Post reports that several fatalities have occured in the past in documented cases in Japan and Korea where individuals consumed the fungus as a tea. In those cases, individuals mistook the deadly species for another.