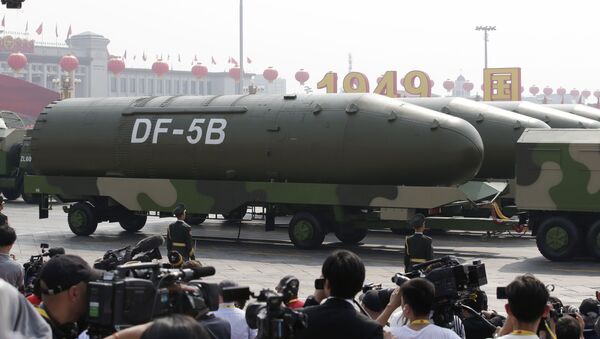 The 70th Anniversary celebrations of the founding of the People’s Republic of China, held on 1 October, showcased the country’s unprecedented number of technological innovations and new military equipment.

Beijing, on Tuesday, held one of its largest-ever military parades, where the Chinese People's Liberation Army rolled out a formidable array of highly-advanced weaponry unlike any other in the world. The commemorative state event, where strategic weapons systems were put on full display, served as an opportunity for Beijing to demonstrate its firm commitment to defend its interests amid a deepening conflict with the United States, Russian military expert Vasily Kashin says.

Making its debut at the China Day parade was the Dongfeng-41 (DF-41) intercontinental ballistic missile, which is capable of reaching any point in the continental United States in 30 minutes at Mach 25 carrying as many as 10 independently-targetable warheads. Beijing rolled out 16 transporter erector launchers of the new solid-fuelled road-mobile systems.

The missile, with a launch mass of up to 80 tonnes, has been in development since the late 1980s and is a fundamentally new strategic weapon for China. The 16 units on display at the parade represent Beijing's ability to launch 160 warheads; China's total nuclear arsenal was until recently thought to include only 300 warheads.

Let us remember that in the early 2000s, the entire Chinese nuclear arsenal consisted of less than 200 deployed warheads; only 20 of them were deployed on DF-5 missiles, two-stage liquid-propellant ICBMs capable of reaching the continental United States. Even if, in reality, each DF-41 carries a much smaller number of warheads (for example, 4-6, which some consider more likely), the introduction of these weapons of mass destruction by a US rival other than Russia remains impressive and sobering. 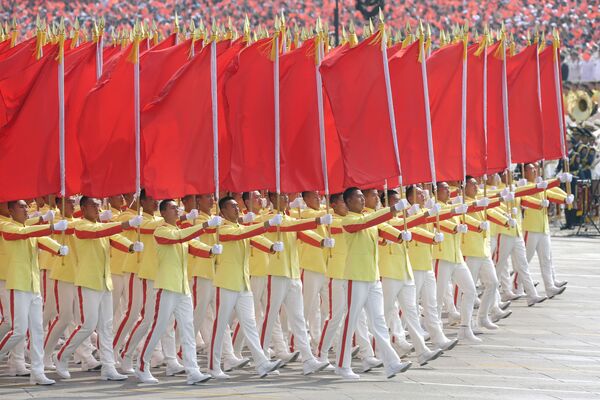 Another missile system, the DF-5B liquid-fuelled ICBM, was demonstrated for the second time (after the 2015 parade). It was the first ICBM China launched, and features 4-6 warheads as well as an updated control system.

Everything suggests that China will continue to improve its missiles, possibly equipping them in the future with hypersonic glide warheads. Thus, the DF-41 will be added to the DF-5 family, but will not replace it.

Finally, for the second time after the show at the Zhurihe Training Base, an updated version of the light Chinese ICBM DF-31AG, which is capable of carrying MIRVs loaded with 3 warheads, was also demonstrated. The establishment of brigades featuring such missiles will also lead to the rapid increase in the capabilities of the Chinese nuclear arsenal.

A Xian H-6N jet bomber took part in the airborne parade, featuring advanced electronic equipment and – for the first time in Chinese bomber aviation – an air refuelling boom. This is also directly related to the development of Chinese nuclear forces. It represents the revival of the air element of the Chinese nuclear triad.

Due to its increased flight duration, reliable Russian D-30KP2 turbofan engines and the possibility of aerial refuelling, the H-6N will be able to carry out combat duty in the air for extended periods of. The bomb bay was eliminated, but under the fuselage, there is a missile hook unit for air-launched ballistic missiles now being tested in China, which can also be equipped with nuclear warheads. 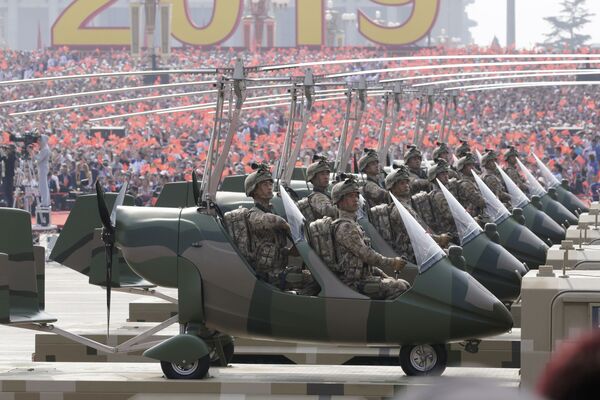 Of particular interest is the new People's Liberation Army Rocket Force’s DF-100 cruise missile. This is, apparently, a medium-range hypersonic cruise missile equipped with a ramjet engine. The USSR and the USA conducted tests on such units (one may recall the Soviet La-350 “Burya” and 3M25 Meteorit-M projects), but they were never put into service. China will be the first country to adopt such a system. There remains a lot of ambiguity regarding the concept of using such a missile, first of all, about the alleged characteristics of its flight. Old Soviet projects involving such weapons were mostly concerned with high-altitude missiles moving towards the target at a speed of Mach 3, but given modern conditions, this approach may not be very effective.

Among the numerous drones presented, in addition to the famous GJ-11 stealth attack drone, of great interest is a mysterious unmanned reconnaissance aircraft. The triangular-shaped UAV has no air intakes and is equipped with liquid-propellant rocket engines, which, as it seems, has not been done since the late 1940s. This is probably a vehicle capable of solving problems at extremely high altitudes with rarefied air, but the concept behind its application is much less clear.

Thus, the parade has shown that China is taking a leading position in many areas regarding the development of military equipment. At the same time, the Chinese military and engineers are not afraid to try extremely original, never-used concepts and approaches, demonstrating independence and a willingness to take serious risks.