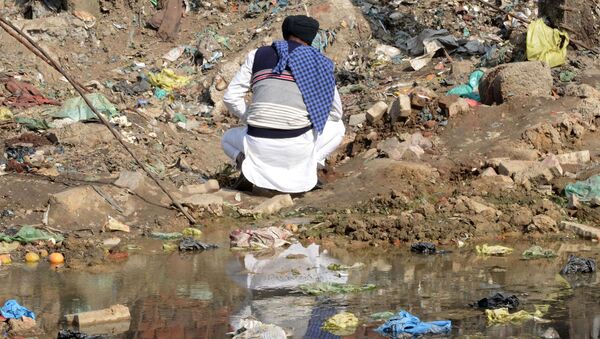 A national survey carried out by NITI Aayog, a policy think tank, has identified as many as 54,130 manual scavengers across 170 districts in 18 of the country’s 29 states.

On Wednesday, when the country celebrated Mahatma Gandhi’s birthday, the Indian prime minister wrote in the visitors’ book at Gandhi’s old residence Sabarmati Ashram: “We are witnessing the fulfilment of Gandhi's dream of Swachh Bharat. I feel lucky that on this occasion when India has successfully stopped open defecation, I’m here at the ashram.”

In July this year, Indian Minister of State for Social Justice and Empowerment Ramdas Athawale said quoting the national survey in the parliament’s upper house Rajya Sabha: "The survey stated 170 identified districts of 18 states on the basis of insanitary latrines converted into sanitary latrines under Swachh Bharat Mission, and inputs received from social organisations working for safai karamcharis (sanitation workers).”

Manual scavenging, a practice of cleaning, carrying, disposing or handling human excreta from dry lavatories and sewers, is prohibited in India under the Prohibition of Employment as Manual Scavengers and their Rehabilitation Act.

According to the Act, no person, local authority or any agency shall engage or employ, either directly or indirectly, any person for hazardous cleaning of a sewer or septic tank.

It is a non-bailable criminal offence and carries a five-year prison term.

Though banned in 1993, the practice is still prevalent in most parts of India and claims hundreds of lives annually.

In the national capital alone, over 80 people have died while cleaning drains and manholes since 1994.