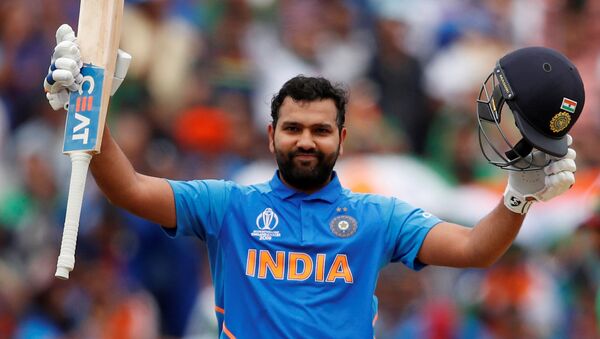 New Delhi (Sputnik): Returning as an opener for the first time, Rohit Sharma, popularly known as 'Hitman' due to his long sixes, silenced the critics after hitting a maiden century against South Africa on the first day of the International Cricket Council (ICC) World Test Championship in Visakhapatnam.

Indian cricket star Rohit Sharma scored a century in the Vizag Test against South Africa on Wednesday, his fourth century in Test matches as an opener.

His fans went crazy on social media, saying that the Mumbai-based batsman's performance was better due to his age and his experience in the game.

ICC, the global governing body of cricket took to Twitter to hail Sharma for his feat, saying: “The HITMAN is back with a bang”.

The HITMAN is back with a bang 💥

Rohit Sharma gets his first Test ton as an opener! pic.twitter.com/DsLfnGCzca

His ardent fans heaped praise for Sharma while recalling his tweet from last year in which he promised “the sun will rise once again” after he was criticised for his bad performance.

Apparently, in Sanskrit, Rohit means the first rays of the sun.

Not many know that in sanskrit ROHIT basically means first rays of the sun that which has risen 😌 #RohitSharma https://t.co/C3OX6egrSf

Peoples were trolling Rohit Sharma for his 2nd ball duck in practice game. Haters were waiting him to fail. But again he trolled them with his bat. Well played but long way to go. #RohitSharma#INDvSA pic.twitter.com/XPFThFRYaI

Rohit Sharma becomes the first player in history of international cricket to score atleast 4 century in each Tests, ODIs and T20Is.

​Hitting out at critics and selection committee for excluding Sharma from longer format of the game, fans said that his return as a centurian is a proof of his hard work and self-confidence.

He is talented, doesn’t perform-He responded with bat

Not a mature captain-He responded with his game

Not a big tournament player-he responded with bat

Can’t open in tests?-Responds with bat

Rohit Sharma returned to the pavilion at 115 runs not out leaving his fans anticipating a double century when he returns to the field on Thursday.