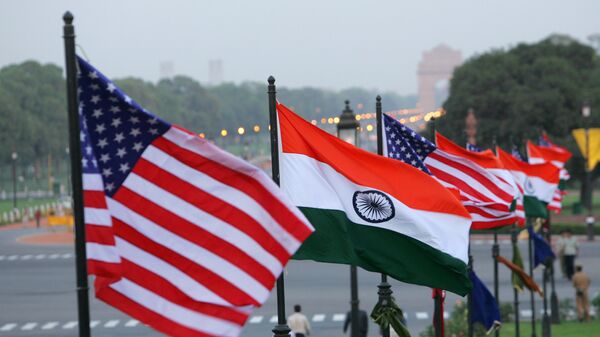 © AP Photo / Gurinder Osan
Subscribe
International
India
Africa
New Delhi (Sputnik): The Indo-Pacific has become the centre point of the rift between the US and China in recent years with Washington making efforts to minimise Beijing's influence across the region through strategic alliances with India, Japan and Australia.

The US has decided to ally with India to marshal a counteroffensive against China’s multi-billion dollar energy infrastructure outreach in the strategically-important Indo-Pacific region.

The US State Department has announced the Flexible Resources Initiative (FRI), under the US-India Clean Energy Finance Task Force to fuel economic growth in the region which is set to account for 60% of the total global increase in energy demand by 2040. The US claims that FRI will execute the United States and India’s shared vision for Indo-Pacific economic growth fuelled by clean energy.

With the FRI initiative, the US aims to ensure market access worth over $3 trillion for its firms involved in developing energy infrastructure. According to the report published in the Centre for Strategic and International Studies, Southeast Asia requires an estimated $2.1 trillion to meet its energy investment needs by 2040. Meanwhile, China has poured roughly half of its $138 billion global investment in power generation into Southeast Asia since 2003, according to Bloomberg New Energy Finance.

The US added that FRI is a component of the broader US-led Asia EDGE (Enhancing Development and Growth through Energy) Initiative. Asia EDGE is an initiative that aims to build energy infrastructure and bolster US energy export across the Indo-Pacific region. The initiative is also focused to ensure that all nations in the region “develop the resources in their exclusive economic zones."

One country impacted by the new initiative will be Vietnam, which has complained to the US and India about China's behaviour in its exclusive economic zones. In July this year, Vietnamese Foreign Ministry spokesperson Le Thị Thu Hang claimed that the “Chinese geological survey vessel group Haiyang Dizhi violated Vietnam’s exclusive economic zone and continental shelf in the south of the East Sea.”