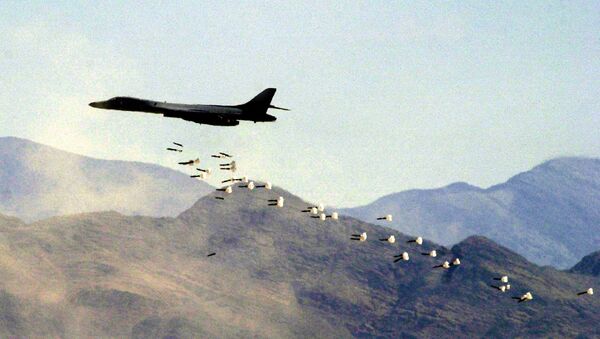 The weapons on the bomber are able to move at 5-times the speed of sound, skip along the boundaries of the earth’s atmosphere and descend upon targets at lightning speed, according to the USAF.

During a recent “mock up” of a B-1B weapons bay, Air Force weapons developers showed that the platform can carry as many as four hypersonic weapons internally.

“In a demo I saw recently, the bulkhead moves as its designed...when you take a CRL(Conventional Rotary Launcher) as its designed. The mock up they had was one of the larger hypersonic weapons. It will be able to carry four or more hypersonic weapons internally. You can see the merit of that,” Gen. Timothy Ray, Commander, Air Force Global Strike Command, told reporters at the Air Force Association conference.

Ray said the service will need to sustain its current fleet of bombers, such as the B-1, B-52 and B-2, until the new B-21 Raider arrives in sufficient numbers. However, the timing of what is considered to be ‘sufficient numbers’ is still a subject of evaluation among Air Force planners. The service said earlier it plans for at least 100 B-21s. Given this evolving timetable, Ray explained his hope regarding some weapons specifics for the current fleet.

“My preference would be that all of them have external hard points open for some carriage and an extended bomb-bay. The external hard points can carry the smaller hypersonics along with JASSM (Joint Air to Surface Standoff Missile, JASSM ER(extended range) and LRASM(Long Range Anti-Ship Missile). You can see a greater versatility for that aircraft configuration,” Ray said.

The demo showed that the B-1Bs magazine capacity can be increased from 24 weapons internally, all the way up to 40, Lt. Col. Dominic Ross, B-1B program element monitor, AFGSC, (Air Force Global Strike Command) said in an Air Force Report, saying that it “gets the B-1 into the larger weapons, the 5,000 pounders. It gets it into the hypersonics game as well.”

Although the B-1B is a bomber with a large airframe, carrying four larger hypersonic weapons internally with an extendable bulkhead brings a significant advantage, Air Force officials said.

“The purpose of the demonstration was to show that we’re still able to move the bulkhead from the forward intermediate bay to the forward location; increasing the intermediate bay capacity from 180 inches to 269 inches,” Ross said. “Additionally, we demonstrated that we can still carry weapons externally on six of the eight hard points, which increases our overall carriage capacity.”

The bombers aren’t the only focus of the Air Force program. The service is amid rapid development with Lockheed on two major programs - the Hypersonic Conventional Strike Weapon and the AGM-183A Air Launched Rapid Response Weapon. DARPA and the Air Force are also working on a Tactical Boost Glide (TBG) program, described in a September 2019 Congressional Research Service report as “a wedge-shaped hypersonic glide vehicle capable of Mach 7+ flight that ‘aims to develop and demonstrate technologies to enable future air-launched, tactical-range hypersonic boost-glide systems.’”