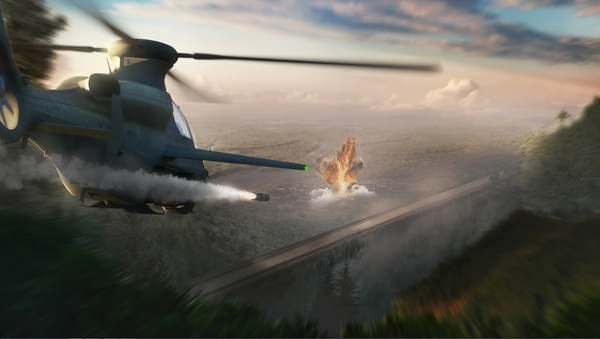 Bell, a subsidiary of Textron, was awarded a contract in April to design a prototype helicopter to fit the US Army’s FARA needs. However, Bell will have to clear several competing designs from the likes of AVX, Boeing, Sikorsky and Karem Aircraft before winning the big contract.

FARA is part of the Army’s Future Vertical Lift (FVL) initiative, a program to put a new generation of helicopters into service by 2030. The other key part of the FVL is the Future Long Range Assault Aircraft (FLRAA), designed to primarily replace the aging UH-60 Black Hawk, built by Sikorsky, and AH-64 Apache, built by Boeing.

Last month, the Army asked the competitors to accommodate duties performed by the MH-6 Little Bird, a scout chopper used for delivering special forces behind enemy lines that’s affectionately known as the “killer egg,” into their FVL design entries.

Bell unveiled the design at its headquarters in Arlington, Virginia, on Tuesday, showing an attack helicopter with a sleek, shark-like body lifted by a single rotor with four short, 40-foot blades.

The Army’s demands of Bell’s design are steep: the aircraft is capable of reaching 180 knots, has a range of 135 nautical miles, with 90 minutes of time on-station and can lift up to 1,400 pounds, according to the program website.

Further, the 360 Invictus has a supplemental power unit, to give it an extra boost at the critical moment, and a fly-by-wire control system, shedding the hydraulics still in use in the aging US chopper fleet.

The chopper was required to have short blades so that the Army is “able to operate in urban canyons as well as out in mixed terrain," Jeffrey Schloesser, executive vice president for strategic pursuits at Bell, said at the unveiling, Military.com reported.

In terms of hurt, the 360 Invictus carries a 20-millimeter cannon and an integrated munitions launcher, because the helicopter stores its weaponry in an internal weapons bay instead of on pylons mounted on the wings, as has been typical for military helicopters. The chopper can carry Hellfire missiles and a variety of other rocketry weapons, and is designed to be easily adaptable to newer munitions that may be invented.

Bell’s competition, a partnership between AVX Aircraft Co. and L-3 Communications Integrated Systems, unveiled their FARA design back in April, featuring a coaxial rotor and more boxy frame compared to Bell’s sleek design, but otherwise sporting many of the same features.

Defense News reported that Karem would be partnering with Northrop Grumman and Raytheon for its design, but little else is known about what they might produce, or when.

Sikorsky, which is owned by Lockheed Martin, has also offered a coaxial chopper based on its S-97 Raider and SB-1 Defiant helicopters, the latter of which is its joint submission with Boeing for the FLRAA program.