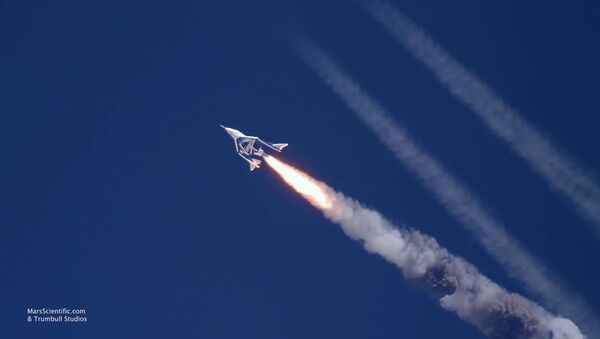 © Youtube / Virgin Galactic
Subscribe
Virgin Galactic is a subsidiary of the Virgin Group, which is involved in developing commercial spacecraft and eventually providing trips to space tourists and missions for scientific research.

On Wednesday, Virgin Galactic signed an agreement with the Italian Air Force which would include putting humans on board its suborbital spacecraft VSS Unity and conducting research.

The signing marks the first time in history that any government has purchased involvement in a private space mission to conduct scientific research carried out by humans.

“We’re delighted to work with the Italian Air Force to further space-based research and technology development through this historic mission," Virgin's chief executive, George Whitesides, said in a news release.

The company also said that the first research flight could take place as early as 2020.

The announcement indicates that Virgin Galactic may be shifting towards commercial operations with VSS Unity as of next year, while also signalling that a large demand for suborbital spaceflight research exists for private companies to invest in.

The mission will proceed in stages. First, the VMS Eve aircraft will launch the rocket-powered VSS Unity spacecraft into flight; following the release, the vehicle will fire its engines to soar to an 80km altitude.

Once the rocket motor stops, the Italian researchers can depart from their seats and work within the few allotted minutes of microgravity.

The researchers will then conduct tests on the biological effects of the transitional phase from gravity to microgravity on the human body as well as the chemical components of green fuels.

So far Virgin has carried out two spaceflights using VSS Unity. First in December 2018, and then again in February 2019, with the spacecraft reaching an altitude of 82.2 and 89.9km, respectively.

The company has been preparing the spacecraft for commercial operations ever since, including modifying the interior of the vehicle to safely carry people.