Things to Know About the Pre-Trial Corruption Hearings Against Netanyahu 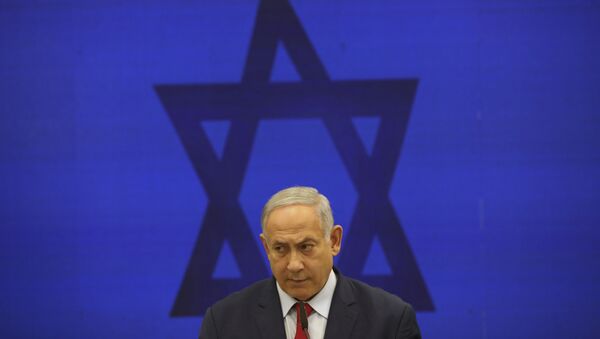 Oleg Burunov
All materialsWrite to the author
Later on Wednesday, the Israel Prime Minister Benjamin Netanyahu is due to face the country’s Attorney General Avichai Mandelblit, who will make a decision on whether Netanyahu will be indicted on bribery and fraud charges.

Wednesday will see the beginning of pre-trial corruption hearings against Israel’s Prime Minister Benjamin Netanyahu which he earlier said should be broadcast live so as to add to “transparency and justice regarding the leak” against him. His request was not approved.

In February, Israeli Attorney-General Avichai Mandelblit signalled his readiness to lodge criminal charges against Netanyahu in probes known as cases 1000, 2000 and 4000.

The Israeli Prime Minister faces fraud and breach of trust charges in all three cases, and bribery charges in case 4000. He vehemently denies the accusations, describing himself as a victim of a politically motivated “witch-hunt” staged by the media and the left in order to force him to resign.

In Case 1000 opened in 2016, Netanyahu and his wife are accused of accepting expensive gifts from wealthy supporters, including Arnon Milchan, a prominent Hollywood producer and Israeli citizen and Australian billionaire businessman James Packer, in the form of high-end cigars, champagne and jewellery in return for advancing their interests.

The costs were worth an estimated total of hundreds of thousands of shekels, with police reporting that the evidence they received showed that the supplies of cigars and champagne were systematic, using code words and couriers.

Case 2000 looks into allegations that the Israeli Prime Minister arranged to obtain favourable coverage from the popular newspaper Yedioth Ahronoth in return for creating problems for its rival, the Israel Hayom, the free newspaper owned by American casino mogul Sheldon Adelson.

During the taped talks between Netanyahu and Yedioth publisher Arnon Mozes, the Israeli Prime Minister was allegedly trying to strike a deal with the media outlet, which is known to be critical of him, so that it could cover stories in favour of him ahead of the 2015 election.

Netanyahu, for his part, claims that he has never intended to seal any real deal with Mozes, but wanted to test the publisher.

Case 4000, known as the Bezeq affair, is connected with suspicions that while working as communications minister in 2014-2017, in addition to his prime ministerial post, Netanyahu was helping the Israeli telecom giant Bezeq, controlled by Shaul Elovitch, in exchange for a beneficial image of Netanyahu and his policies in the media.

The probe claimed that the Prime Minister hadn’t disclosed his close friendship with Elovitch, the controlling shareholder in Bezeq, which could potentially help Netanyahu shape policy in a way that could benefit the company.

Netanyahu responded to the accusations by insisting that he and Elovitch were little more than acquaintances, even though in an earlier statement  he said that they had been friends for 20 years.

The Goal of the Pre-Trial Hearings

The hearings may reportedly give Netanyahu’s legal team an opportunity to speak out against possible charges and try to prod Attorney-General Mandelblit to either scrap or soften them.

Earlier, it was reported that Netanyahu will not attend the hearings which will be wrapped up next Monday. Upon dealing with arguments, Mandelblit is expected to decide on whether to bring charges against Netanyahu by the end of December.

Repercussions of Netanyahu Being Indicted

If the Israeli Prime Minister is charged, it will be followed by his trial, a process that may take many months given that Netanyahu may seek a plea deal rather than stand trial.

Legally, Netanyahu would not be obliged to resign because Israeli law stipulates that the country’s prime minister should stand down if finally convicted, but that he can remain in office throughout legal proceedings, including appeals.

Netanyahu’s MP supporters, for their part, pledged to help grant him parliamentary immunity from prosecution, a process that will depend on how many lawmakers will give their go-ahead for the move.

Will Netanyahu Be Put Behind Bars if Convicted?

Under Israeli legislation, bribery charges envisage a sentence of up to 10 years in prison and/or a fine. If convicted of fraud and breach of trust, Netanyahu could face up to three years behind bars.