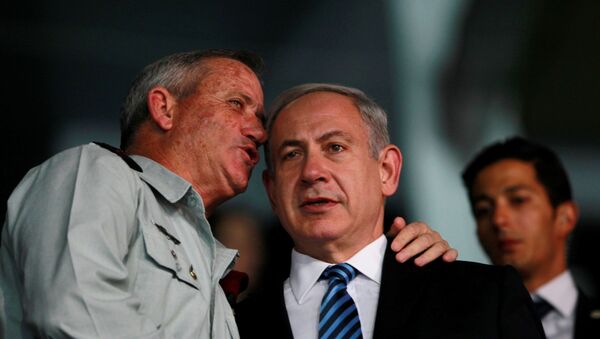 © REUTERS / Baz Ratner
Subscribe
On Wednesday, Israel’s Blue and White Party, led by Benny Gantz, announced that it would not meet with negotiators from Israeli Prime Minister Benjamin Netanyahu’s Likud party that day as originally planned, claiming that the conditions needed to hold a productive meeting among the negotiation teams have not been attained.

“First of all, I was [surprised] at how many people seem to think that a third election was not possible, that there was going to be a clear path for someone to form a government at the end of this. The polling numbers never suggested anything of the kind - not even close,” Plitnick told hosts Eugene Puryear and Sean Blackmon, noting that neither Blue and White nor Likud have a chance of reaching the 61-seat majority threshold necessary to form a government.

“I think a third election is the most likely outcome. The ways that can be avoided … and there are a few, but almost all of them end with a unity government between Blue and White and Likud … right now, neither side can even approach 61 seats, and the real problem is Netanyahu,” he continued. “The fact of the matter is that there would be a unity government already [if it weren’t for Netanyahu]. Likud and Blue and White would already be in partnership if Netanyahu would step down.”

“Netanyahu - beyond just wanting to hold onto power and all those things - I have to admit, he has good reason to not want to step down,” Plitnick explained, noting that  once Netanyahu does step down, his protection from indictment goes away, “and it is overwhelmingly likely that he will end up in jail - even if he stays in office, there is a very good chance he will end up in jail. I can understand why he doesn’t want to give up that seat, and the question going forward is going to be: how much is that going to alienate Likud voters?

On Wednesday, Likud released a statement claiming to be "stunned by Kahol Lavan's [Blue and White’s] decision to blow up negotiations between Prime Minister Netanyahu and Gantz,” Haaretz reported.

According to Plitnick, both Likud and Blue and White saw their support from voters dip in the most recent election.

“Both Likud and Blue and White lost a bunch of seats between the first and second elections this year. A lot of the good seats were lost because people are fed up with Netanyahu and his shenanigans,” he said. “They stayed on the right. They went to other right-wing parties. A lot of them went to [Avigdor] Liebeman’s [Yisrael Beiteinu] party.”

“The real question is: is Likud going to rise up and vote Netanyahu out of the leadership, which would then open the door for that unity government? Right now, that can't happen. Netanyahu’s support remains too strong within the party, but I think if it starts to become apparent that there’s going to be a third election, and I think most people are not really considering that possibility … if people sense that more and more Likud voters are going to go to other parties, they may rise up against Netanyahu,” Plitnick explained, also noting that such a scenario may actually make justice for Palestinians even more challenging.

“Benny Gantz isn’t going to have very different policies toward the Palestinians than Netanyahu did. His rhetoric might be different because he will want to cooperate and be on friendlier terms not only with Europe and with the Trump administration, but also with Democrats in the US and the Jewish community in the US. All of them want to see a different tone coming out of Israel, one that talks about a two-state solution, one that talks about a peaceful future, etc. But on a policy level, they are really not demanding any major change from Israel,” Plitnick said.

“If there is a unity government, certain things will get better within Israel. I think there will be a lot less clear authoritarianism within the country. But in terms of its standing in the region, its attitudes toward its neighbors and particularly its attitudes towards the Palestinians - I don’t think much will change,” Plitnick concluded.