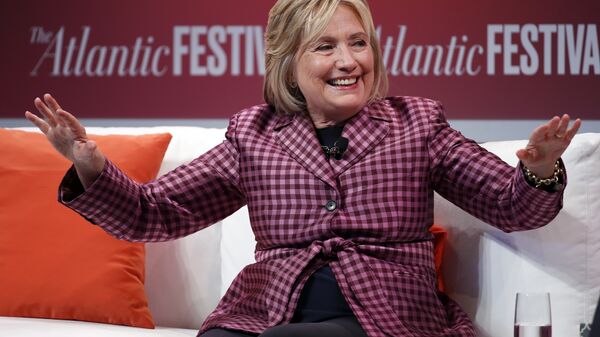 Ilya Tsukanov
All materialsWrite to the author
Sanders, 78, was hospitalised on Wednesday after experiencing heart trouble, with doctors inserting two stents after discovering a blockage in one of his arteries.

Former First Lady and Democratic Presidential Nominee Hillary Clinton’s reaction to the news that her former Democratic rival had been hospitalised seemed oddly reminiscent of a gesture she made with her hands when Libyan leader Muammar Gaddafi was brutally beaten and murdered by anti-government militia during the NATO-backed war in Libya in 2011.

Clinton and her daughter Chelsea appeared on ABC's The View on Wednesday to promote their new book. After being cheerfully introduced, cohost Whoopi Goldberg asked Clinton about Sanders.

“So, you know you just heard about Bernie,” Goldberg said. “Yes,” Clinton answered, raising her hands in a clasping motion.

“Sending him your best,” Goldberg continued, with Clinton responding “Wish him and hope for the best. [sic]”

Chelsea then interjected, reminding viewers, “If you have chest pains, please go to the doctor,” and commenting on the higher risk among men of dying from heart trouble.

Hillary, Chelsea Clinton wish Sen. Bernie Sanders well after he was hospitalized for chest pains: “If you have chest pains, please go to the doctor... although heart disease is more pervasive in women, it’s more fatal to men because men wait too long.” https://t.co/wU96lstALK pic.twitter.com/lSVbbWPho6

Oddly, Clinton’s hand gesture seemed eerily similar to her body language in October, 2011 when, upon hearing that Libyan leader Muammar Gaddafi had been killed, the secretary of state laughed and joked with a CBS interviewer, telling her “We came, we saw, he died,” and raising and clasping her hands as she smiled.

Hillary Clinton and Bernie Sanders have had a difficult relationship since the 2016, when the former secretary of state defeated the long-time Vermont senator in the Democratic primaries, only to lose the general election in November, as many Sanders supporters accused Clinton and the party of foul play during the primaries.

In a 2017 book on the 2016 race, Clinton blamed Sanders personally and his “Bernie Bros” supporters for her loss, accusing the senator of “resort[ing] to innuendo and impugning my character,” and alleging that his supporters were “harassing my supporters online. It got ugly and more than a little sexist.”

Sanders was hospitalised on Wednesday after experiencing chest pains, with doctors inserting two stents into his heart. The development prompted a brief halt to his campaign for the nomination as the Democrats’ candidate for president in 2020, with Sanders canceling all planned events until further notice. At the same time, Sanders’ campaign staff stressed that Bernie was “conversing and in good spirits,” and would be “resting up over the next few days.”

In 2011, then-Secretary of State Hillary Clinton had aggressively lobbied President Barack Obama to use force to support the anti-government militia groups which had formed in eastern Libya during the so-called Arab Spring protests. The US, French and British-led military intervention in the country led to the country's collapse into a failed state, with Gaddafi himself caught and filmed by rebels as he was tortured and executed. Later, President Obama would come to describe US efforts in the aftermath of the Libya strikes the worst mistake of his presidency.