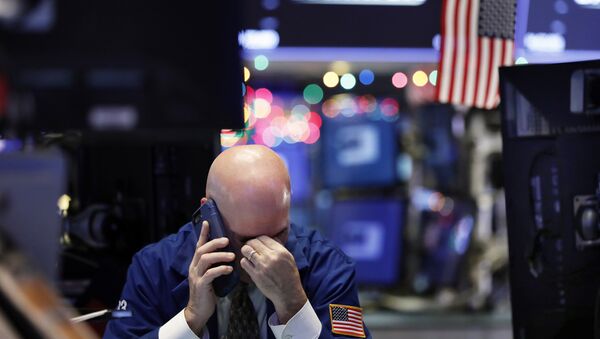 © AP Photo / Richard Drew
Subscribe
US stocks fell by more than 300 points on Tuesday following the worst report on US manufacturing from the Institute for Supply Management (ISM) in a decade.

The Tuesday report from ISM, the world’s oldest and largest supply management association, found that economic activity in the US manufacturing sector continued its slowdown in September from the previous month, falling to the lowest level since June 2009, at the tail end of the Great Recession that gutted the US financial industry.

When the report dropped Tuesday morning, US stocks immediately fell from their early gains, with the Dow Jones Industrial Average (DJIA) falling by nearly 200 points. The DJIA continued its slide throughout the day, ending around 343.79. Other stock indices fell similarly, with the Nasdaq declining by 90.65 points and S&P 500 by 36.49.

“This is serious,” Torsten Sløk, chief economist at Deutsche Bank Securities in New York, told Reuters Tuesday morning. “There is no end in sight to this slowdown, the recession risk is real.”

August was a rough month for US stocks, which by mid-month had contracted almost 7%. August 14 registered the fourth-largest point drop on record for the Dow, which collapsed more than 800 points amid discovery of an “inverted yield curve” in US savings bonds. A situation in which the yield on short-term bonds exceeds the yield on longer-term bonds has preceded every economic recession in modern history, Sputnik reported.

Naturally, US President Donald Trump blamed Tuesday’s downturn on the Federal Reserve’s lukewarm disposition toward his perennial solution to economic problems: slashing the federal funds interest rate, which governs the payback percentage banks are obliged to pay for overnight loans.

As I predicted, Jay Powell and the Federal Reserve have allowed the Dollar to get so strong, especially relative to ALL other currencies, that our manufacturers are being negatively affected. Fed Rate too high. They are their own worst enemies, they don’t have a clue. Pathetic!

​On Monday, the US dollar was trading at its highest levels in two years, boosted by market instabilities around the world caused by ongoing protests in Hong Kong and the recent attack on two Saudi Aramco oil facilities, Sputnik reported.

However, Market Watch noted that economists place the majority of the blame for the downturn on the ongoing trade war with China, rather than interest rates that may or may not be too high.

The Fed last lowered interest rates on September 19, with the Federal Open Market Committee citing weakening exports and business investment, as well as the recent tariff hikes, as reasons for the move.

The two nights before the rate slash, the Fed found itself injecting tens of billions of dollars into US banks, which suddenly found themselves short on cash - the first time it'd been forced to hold an auction in a decade, according to the Wall Street Journal.

PranSa
1 October 2019, 23:28 GMT9
000000
So...you complain about other countries manipulating the worth of their currencies yet you advocate doing this yourself.. Its all about "manipulation" nothing else.. The whole problem for america is that people are not wanting their currency anymore ..or at least to trade with it.. Not getting the handouts for free like you used to the teat has become rather restricted
tonyw247
2 October 2019, 00:45 GMT4
000000
Newsfeed
0
New firstOld first
loader
LIVE
Заголовок открываемого материала
Access to the chat has been blocked for violating the rules . You will be able to participate again through:∞. If you do not agree with the blocking, please use the feedback form
The discussion is closed. You can participate in the discussion within 24 hours after the publication of the article.
To participate in the discussion
log in or register
loader
Chats
Заголовок открываемого материала
Worldwide
InternationalEnglishEnglishMundoEspañolSpanish
Europe
DeutschlandDeutschGermanFranceFrançaisFrenchΕλλάδαΕλληνικάGreekItaliaItalianoItalianČeská republikaČeštinaCzechPolskaPolskiPolishСрбиjаСрпскиSerbianLatvijaLatviešuLatvianLietuvaLietuviųLithuanianMoldovaMoldoveneascăMoldavianБеларусьБеларускiBelarusian
Transcaucasia
ԱրմենիաՀայերենArmenianАҧсныАҧсышәалаAbkhazХуссар ИрыстонИронауОssetianსაქართველოქართულიGeorgianAzərbaycanАzərbaycancaAzerbaijani
Middle East
Sputnik عربيArabicArabicTürkiyeTürkçeTurkishSputnik ایرانPersianPersianSputnik افغانستانDariDari
Central Asia
ҚазақстанҚазақ тіліKazakhКыргызстанКыргызчаKyrgyzOʻzbekistonЎзбекчаUzbekТоҷикистонТоҷикӣTajik
East & Southeast Asia
Việt NamTiếng ViệtVietnamese日本日本語Japanese中国中文Chinese
South America
BrasilPortuguêsPortuguese
NewsfeedBreaking
01:58 GMT'Mindless': Netizens Fire Back After US Rep Posts Pro-Gun Christmas Pic Days After Michigan Killings
01:51 GMTRussia’s Sovereign Right to Deploy Troops on National Territory Poses No Threat - Embassy
00:04 GMTMagnitude 6.0 Earthquake Rocks Indonesia - EMSC
YesterdayPentagon Chief Says US Ready to Support Taiwan in Face of China’s Military Rise
YesterdayAmericans' Confidence in US Military Continues Its Decline, Survey Shows
YesterdayCNN Fires Chris Cuomo Over His Efforts to Help Brother With Sexual Harassment Claims
YesterdayUS Democracy in Trouble? Half of Young Americans Polled Agree
YesterdaySuper-Union Leader Explains Donation Cut-Off to Cash-Strapped Labour Party
YesterdayFlight From Tel Aviv to Moscow Changed Flight Level Due to NATO Spy Plane - Air Authority
YesterdayPolice: Parents of Suspected Michigan School Shooter Had Help Hiding in Detroit Warehouse
YesterdayKiev Seizure, Donbas Advance: German Tabloid Sources Fantasize Russian Invasion of Ukraine
YesterdayTurkish Authorities Uncover Explosive Device on Police Car Assigned to Erdogan Rally
YesterdayBlast Heard Over Iran's Natanz, Where Nuclear Facility Located
YesterdaySouth African Province at Centre of Omicron COVID Variant Sees More Children in Hospital
YesterdayPolish Prime Minister Orders Cybesecurity Alert Ahead of UN Forum
YesterdayGreek Prime Minister Assures Vatican That Condition of Migrants in Greece Improved
YesterdayUS Warns of ‘Terrible Consequences’ of Possible Chinese Invasion of Taiwan
Yesterday‘Killer Robots’ Threat Persists as US Unwilling to Discuss Ban on Lethal Autonomous Weapons Systems
YesterdayLionel Messi Reveals He 'Never' Wanted to Become Best Football Player
YesterdayPutin, Biden Will Hold a Video Call on Tuesday Evening