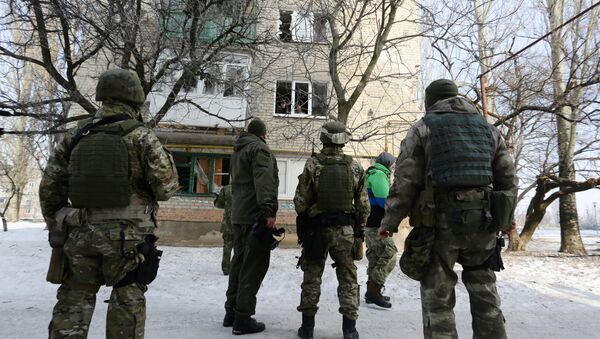 KIEV (Sputnik) - The Contact Group on Ukraine has agreed on the long-awaited separation of forces in Petrivske and Zolote areas in Donbass, Ukrainian President Volodymyr Zelensky said Tuesday.

"An agreement was reached on the beginning of the withdrawal of troops, I congratulate everyone on the beginning, we very much believe in this separation of forces in Petrivske and Zolote," Zelenskyy said in a broadcast by the 112. Ukraine television.

He personally guaranteed that the local population will be protected and the separation of forces will not affect security in these settlements.

Zelensky also said that the new law on Donbass, which is due to be prepared by parliament and which is going to be open for public discussion, will be in effect permanently following elections, in accordance with Ukrainian constitution and legislation. The president said the law will include "Steinmeier's formula".

The so-called "Steinmeier formula" was proposed in October 2015 by then German Foreign Minister and incumbent President Frank-Walter Steinmeier. It envisages a special status for the Donbass region and its temporary introduction during the local elections under the oversight of the Organization for Security and Co-operation in Europe (OSCE). This process would then allow a law on Donbass' special status to take full effect.

The conflict in Donbass flared in 2014, when Ukrainian authorities launched a military operation against the self-proclaimed Donetsk and Lugansk People's Republics that refused to recognise the new government in Kiev, which came to power after what they considered to be a coup. In February 2015, the warring parties signed the Minsk peace accords to end the fighting in the region.