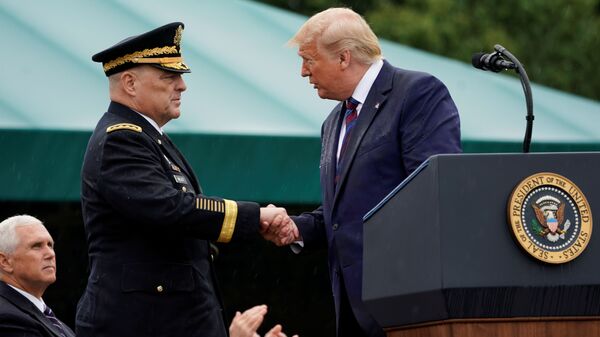 Ilya Tsukanov
All materialsWrite to the author
Washington began a $1.5 trillion 30-year modernisation of the US’s nuclear arsenal in 2010, with President Trump’s 2018 Nuclear Posture Review calling for the creation of new tactical and sea-launched weapons, and the lowering of the threshold for their use, including in response to hypothetical “significant non-nuclear strategic attacks”.

The United States has completely renewed its nuclear arsenal, and has spent trillions of dollars on defence over the past two years, President Donald Trump has announced.

“You know, we’ve spent $2.5 trillion since I’m President - $2.5 trillion – far more than this country has ever even thought about spending. But we had to have a modern, great military with the most magnificent and the finest machinery, planes, boats, ships, weapons of all kinds,” Trump said, speaking at the swearing-in ceremony for the new Chairman of the Joint Chiefs of Staff Gen. Mark Milley on Monday.

“We’ve never had anything like you have today. When I took over, we were a very depleted military, and today we’re at a level that we have never even come close to,” Trump added, while praising the efforts of outgoing Joint Chiefs chairman Gen. Joseph Dunford.

Boasting that the US military was “the greatest fighting force, without question, in the history of the world,” Trump noted that his tenure has witnessed the renewal of the US nuclear arsenal.

“Our nuclear has been totally rebuilt; some brand new and some refurbished. But we hope to God we never have to use any of our weapons,” Trump said.

According to the Stockholm International Peace Research Institute, US defence spending grew by 4.6 percent billion in 2018 compared to 2017, with spending totalling $649 billion. The US defence budget for the fiscal year climbed to $693 billion, with the Pentagon proposing a defence budget of $738 billion for fiscal year 2020.

Earlier this year, shortly after making the decision to pull out of the Intermediate Range Nuclear Forces Treaty (INF), the US halted the disclosure of information about the size of its nuclear arsenal, leading to speculation that the US may be preparing to ramp up production of medium-range missiles banned under the INF. The US nuclear arsenal was estimated to consist of some 3,822 nuclear warheads of all classes as of 30 September 2017.

In July, Gen. Mark Milley told a Senate panel that he expected China to be the “main challenger to US national security over the next 50, 100 years,” adding that he wanted to ‘make clear’ that Beijing was an “adversary,” not “an enemy.”