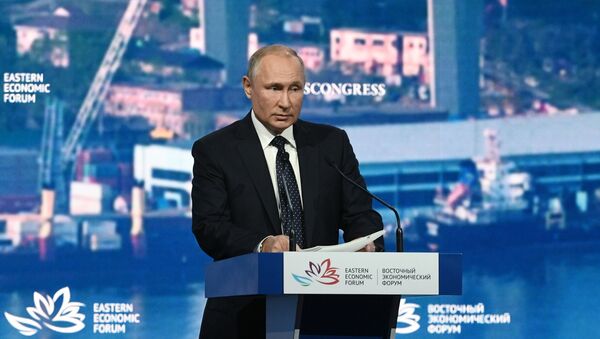 Russian President Vladimir Putin and his Iranian counterpart, Hassan Rouhani will hold negotiations on the sidelines of a meeting of the Supreme Eurasian Economic Council in Yerevan.

Vladimir Putin and Hassan Rouhani, will discuss tensions in the Strait of Hormuz and the fate of the Joint Comprehensive Plan of Action (JCPOA) at their upcoming meeting, Kremlin spokesman Dmitry Peskov said on Tuesday.

"This will be a continuation of the dialogue that took place literally several days ago. You know that there has been a meeting just recently. Today a tete-a-tete meeting is expected to take place. Obviously, both the tense situation in the Strait of Hormuz area, and the situation around the JCPOA [will be on the agenda]," Peskov told reporters.

The Kremlin spokesman also noted with regret that the existing initiatives for resolving the JCPOA crisis had not brought any result yet.

Putin and Rouhani will hold a separate bilateral meeting on the sidelines of the Supreme Eurasian Economic Council, which will be held in Yerevan on Tuesday.

Putin and Rouhani met a few weeks ago in Ankara, where on 16 September a trilateral summit between Russia-Turkey-Iran to discuss the Syria took place.

Russian Military Base Creation in Belarus

Moscow is currently not discussing with Minsk the possibility of creating a Russian military base in Belarus, since the two countries have mutual commitments compensating for its absence, Dmitry Peskov said on Tuesday.

"Russia and Belarus have quite a great number of allied commitments. There are really many mutual commitments that compensate for the absence of such a stationing site. However, no discussion is being conducted now," Peskov told reporters.

Belarussian Foreign Minister Vladimir Makei recently voiced the belief that there is currently no sense in housing a Russian military base on the territory of Belarus, noting that the matter is currently not on the agenda.

"The debt-related matters were briefly discussed during the recent visit, this is the only thing I can confirm," Peskov replied to a question on whether Maduro had asked Putin to restructure Venezuela's debt.

Vladimir Putin may hold a meeting with ExxonMobil CEO Darren Woods on the sidelines of the Russian Energy Week forum on Wednesday to discuss possible cooperation, Peskov said.

"We hope that the president will be able to hold a separate meeting with ExxonMobil head on the sidelines of the forum. Aspects of possible cooperation will be discussed," Peskov told reporters on Tuesday.

When asked whether Putin and Woods could discuss ExxonMobil's withdrawal from Rosneft's projects due to sanctions, Peskov said there were no "specific plans."

"If it is possible, a brief meeting on the sidelines of the forum will be held. I don't think there will be any substantive discussion," Peskov explained.

Putin will take part in a plenary session of the Russian Energy Week on Wednesday. The forum will run from 2-5 October in Moscow.