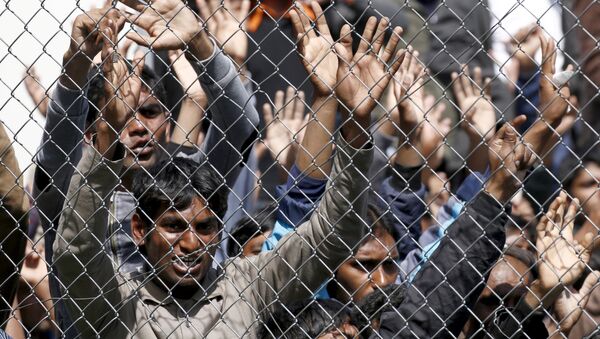 ATHENS (Sputnik) - The Greek Ministerial Council has taken a harsh approach toward the immigration laws by deciding to tighten the asylum application system, the government spokesman, Stelios Petsas said.

The meeting on Monday was announced in advance, but the day before it, riots broke out on the island of Lesbos. Migrants set the housing containers on fire at Moria refugee camp, which is designed for 3,000 people but hosts 12,600 migrants. In recent months, the migration flow from the Turkish coast has sharply increased. In total, 30,300 migrants seek refuge on the islands of the Aegean Sea.

"The latest developments in the field of migration and refugee flows as well as the draft law on tightening the application and asylum system were discussed in the meeting," the official said in a statement.

The Greek government also plans to fasten the return of illegal migrants to Turkey, where they usually arrive from.

Petsas added that Deputy Minister for Migration Policy Giorgos Koumoutsakos will visit Turkey from October 2-3, to hold talks on the growth of the flow of migrants with his Turkish counterpart. Visits by the French and German Interior Ministers to Turkey and Greece are also expected this week.

Greece decided to include the issue of increased migration on the agenda of the European Council on October 17-18, he added.

Despite the migrant camps being overcrowded and dire living conditions, the Greek authorities remain slow to transfer people to the mainland. Athens has accused Ankara of breaching the EU-Turkish deal on migration under which Ankara was supposed to limit the non-stop flow of migrants from the Middle East and North Africa, who are trying to enter the European Union by sea in Greece via transit in Turkey.