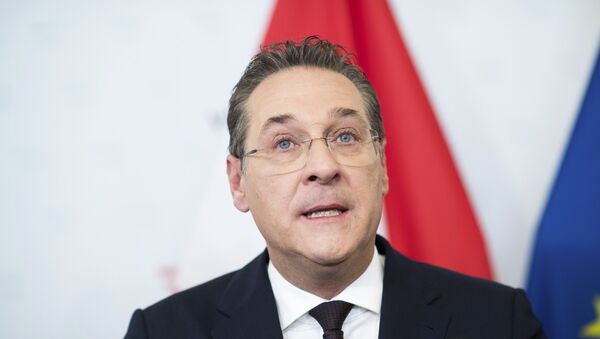 © AP Photo / Michael Gruber
Subscribe
Svetlana Ekimenko
All materialsWrite to the author
Talk of an eventual comeback by former Austrian vice chancellor Heinz-Christian Strache had intensified in recent months despite the release of a video that prompted him to resign the leadership of the Austrian Freedom Party and brought down the coalition government in May.

Heinz-Christian Strache, the former Austrian vice chancellor at the heart of a scandal that triggered the collapse of Chancellor Sebastian Kurz's government, announced his decision to suspend membership in the right-wing Freedom Party on Tuesday, thereby wrapping up his political career.

"I am announcing with a heavy heart that I am suspending my membership in the Freedom Party until further notice and until legal clarification of the accusations against me," AFP quoted the politician as saying.

"I am not only suspending my party membership but, as of today, also ceasing all political activity and not seeking any political function," he added in a statement to reporters in Vienna.

Strache on Tuesday renewed his denial of any wrongdoing, emphasising he was quitting politics to protect his family and prevent splits in the party.

Strache's announcement preceded a meeting of the Freedom Party's leadership, as recriminations against him had been rising within the party ranks.

Leaders of the Freedom Party gathered Tuesday in Vienna, reeling from a heavy poll rout sustained in Sunday's elections. 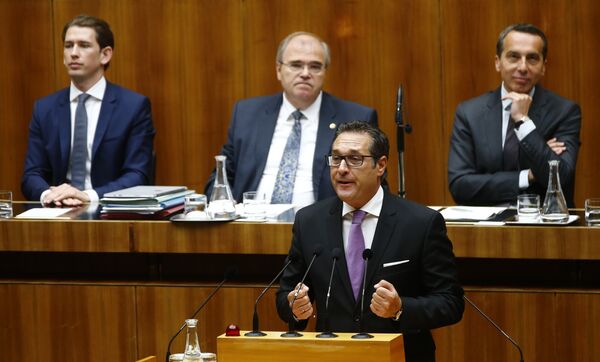 The party won around 16% of the vote, 10 percentage points fewer than in Austria's 2017 election, as supporters either switched to Sebastian Kurz's center-right People's Party or snubbed the vote.

Heinz-Christian Strache, Austrian Vice Chancellor and leader of the country’s right-wing Freedom Party, resigned in May amid a crisis at the heart of Austria's coalition government.

Strache's resignation followed a leaked video showing him at a luxury Ibiza hotel in 2017 purportedly offering lucrative government contracts to a woman he said he believed was a Russian oligarch's niece in exchange for campaign donations.

In a brief statement to the press in Vienna at the time of “Ibiza-gate”, as the scandal was dubbed, Strache described his actions as "dumb, irresponsible and a mistake," but insisted his political foes had conspired to get rid of him.

"It was a carefully planned political assassination," Strache said.

Strache, who led the Freedom Party for 14 years, resigned a week ahead of crucial European Parliament elections as parties were making their final pitches to voters.

Currently, Strache also faces an investigation for suspected breach of trust over the alleged billing of private expenses to his party.

Prosecutors confirmed 29 September they were looking into his expenses and questioned his former bodyguard and former office manager "on the suspicion... of submitting fake receipts" costing the party more than 5,000 euros ($5,500).

000000
Popular comments
So, Russia cost career of one more politician!