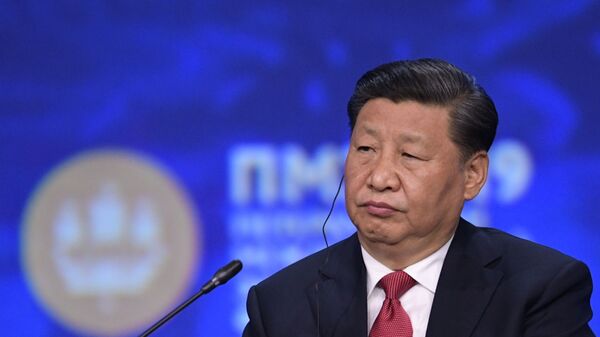 BEIJING (Sputnik) - Chinese President Xi Jinping said on Tuesday during celebrations marking the 70th anniversary of the founding of People's Republic of China that his country would stay committed to the so-called one country, two systems principle with regard to Hong Kong.

"Moving forward, we must adhere to the 'peaceful unification' and 'one country, two systems' principles, maintain prosperity and stability in Hong Kong and Macau, promote the peaceful development of relations between the two shores of the Taiwan Strait, unite all the sons and daughters of China, and continue to strive for the full unification of our homeland," Xi said while addressing the event.

Protesters in Hong Kong have pledged to organize more rallies in different districts on Tuesday, a day on which big celebrations, including a military parade, are being held in the Chinese capital to mark the 70th anniversary of China's founding. On Monday, Hong Kong's Appeal Board on Public Meetings and Processions upheld the police's decision to ban the planned protests and rallies.

Over the past months, Hong Kong has faced waves of rallies against now-withdrawn amendments to the city's extradition law. These protests have often turned violent after demonstrators and police clash. Beijing views the situation in Hong Kong as a result of foreign interference in China's domestic affairs and fully supports the actions of the local authorities.

In early September, the controversial extradition bill was formally withdrawn, but protesters have continued to take the streets to demand universal suffrage, an end to legal procedures against fellow demonstrators and an investigation into alleged police violence. The Hong Kong government, in turn, has repeatedly condemned the illegal acts committed by the protesters during their demonstrations.

The principle in question first referred to China's policy with Taiwan. In the 1970s, Beijing pushed for the island nation to be reunited with the mainland, promising that Taipei would retain a degree of autonomy. The same principle was later applied to two autonomous Chinese territories — Hong Kong and Macau.