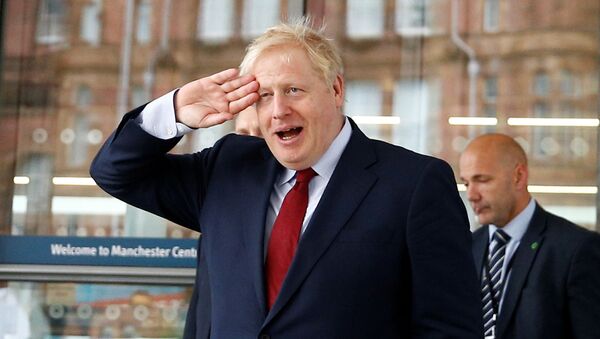 UK Prime Minister Boris Johnson said he was “cautiously optimistic” about securing a Brexit deal ahead of the 31 October deadline while speaking at the Tory party conference that’s underway in Manchester.

"I'm cautiously optimistic. We have made some pretty big moves, we are waiting to see whether our European friends will help us and whether we can find the right landing zone," Johnson told Conservative party members on Monday.

The Prime Minister reaffirmed his hardline stance of leaving the bloc even without a deal despite acknowledging that he would like to have one in place.

"Whatever happens, we’ll come out on 31 October," he stressed at the conference under the slogan "Get Brexit Done".

Dr. Ben Williams, a tutor in politics and political theory at the University of Salford, said that speculation continues to mount as to whether the country will leave on that date, or rather seek a further extension as previously happened in March this year.

"While negotiations supposedly continue, many have questioned how genuine Johnson’s efforts have been to strike a deal. His critics are primarily concerned that leaving with ‘No Deal’ would have major negative economic consequences for UK businesses and trading links with the outside world," Williams explained.

But how Johnson plans to exit the bloc without a deal is still not clear. The Parliament has adopted a bill - the Benn Act - that would force the Prime Minister to request a three-month Brexit extension to 31 January next year if no is agreed by 19 October. Johnson has dubbed the law “the surrender act”.

"[...] The Prime Minister and his advisors have indicated they may seek to find a way around if they wish to in order to finally deliver a 'leave' outcome," Williams noted.

Chancellor Sajid Javid echoed the Prime Minister’s ambition to get the UK out of the EU deal or no deal suggesting that there’s a way around the Benn Act.

Javid told BBC that the government is preparing "a significant economic policy response" in the event there’s no deal reached.

"If Johnson does decide to push a 'No Deal' through, he could face significant repercussions, most notably if job losses and business failures follow because of it. He could also risk further legal challenges via the Supreme Court, while there are ongoing threats of protest and civil unrest against the government’s broader Brexit strategy.  Overall the prospect of a 'No Deal' draws ever closer, and in the meantime, tensions within the country continue to poison political debate," Williams added.

This comes amid British media reports that the UK government is ready to reveal an updated draft Brexit deal for EU negotiations in the coming days that would offer a solution to the Irish backstop.

Quoting government sources the reports suggest that customs clearance centres should be set up close to the border in Northern Ireland and Ireland.

But the alleged proposal has already received criticism from Irish Deputy Prime Minister Simon Coveney who took to Twitter to share his thoughts.

Non-Paper = Non-Starter. Time the EU had a serious proposal from the UK Govt if a #Brexit deal is to be achievable in October. NI and IRE deserves better!

​The Irish border backstop has been a key stumbling block in Brexit talks. Johnson has insisted that the backstop must be scrapped, while the EU wants to keep it as an insurance policy in UK-EU Brexit negotiations to guarantee there is no hard border between UK's Northern Ireland and the Republic of Ireland, an EU member state.

The EU has asked the UK government to come up with Irish backstop alternatives and has accused it of failing so far to provide any workable proposals.

But a revised Brexit plan needs to be put forward ahead of the 17-18 October EU summit in Brussels, where Brexit will be at the top of the agenda.