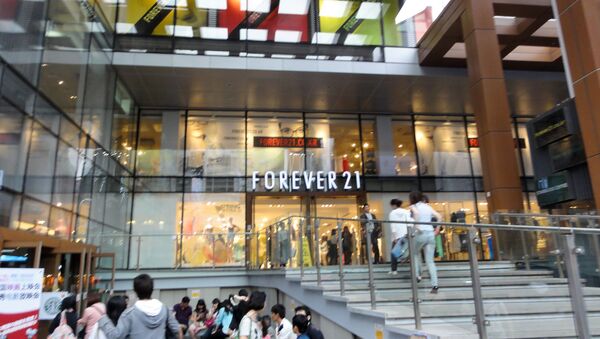 CC BY 2.0 / Flickr/jgmarcelino /
Subscribe
The California-based, family-owned retailer that helped earlier popularize 'fast fashion' in the US announced on Sunday night that it would file for bankruptcy, ceasing its operations in 40 countries, including Canada and Japan, as part of a Chapter 11 move, media reported.

“What we’re hoping to do with this process is just to simplify things so we can get back to doing what we do best”, executive vice president Linda Chang said, cited by The New York Times.

Forever 21 was founded in the 1980s in California by a family of immigrants from South Korea. The fashion retailer reportedly experienced big success in the early 2000s with troves of merchandise that imitated of-the-moment designer styles, but at very low prices.

The company's core audience was primarily teenage girls and young women whose desire to be trendy helped the company expand its chain at a rapid clip over the last decades.

“We went from seven countries to 47 countries within a less-than-six-year time frame and with that came a lot of complexity [...] the retail industry is obviously changing — there has been a softening of mall traffic and sales are shifting more to online”, Chang said, cited by The New York Times.

According to the media report, the company employs about 32,800 people, down from 43,000 in 2016. The fashion retailer reportedly saw its revenue drop to $3.3 billion last year, down from $4.4 billion in 2016. Forever 21 expects that restructuring will bring in some $2.5 billion in annual sales, The New York Times said.

The retailer - which reportedly did not pay rent on its stores in September in order to preserve capital - has stated that it believes it can renegotiate many of the leases on its US stores after the bankruptcy filing, The New York Times said.