UK to Leave the European Union on 31 October - Finance Minister 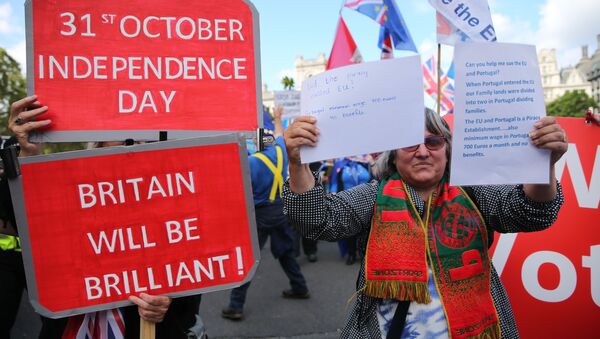 According to current legislation, the United Kingdom is entitled to request a three-month Brexit extension on 19 October if a deal is not secured that would maintain trade relations with the EU after the 31 October Brexit deadline.

The United Kingdom will withdraw from the European Union in 31 days regardless of whether its breakaway will be with a deal or not, UK Chancellor of the Exchequer Sajid Javid said at a Tory conference on Monday.

Earlier in the day, the minister issued a similar statement speaking to ITV, adding, however, that he was hoping for a deal.

"If we cannot strike a deal, I think it is important to leave in any case and leave with no deal. It is not perfect but it is appropriate that we leave on the 31st," Javid said.

At the same time, the minister refused to specify how the government intends to deliver Brexit in a no-deal scenario.

"The legislation that parliament has passed, of course, has made things more difficult, but we are clear our own policy is completely unchanged: We will be leaving on the 31st," Javid said.

Separately, Javid also told Sky News that he entirely trusted the Prime Minister and his word.

According to the finance minister, it is hard to say for sure how much Brexit will cost the country.

'Tensions are high and so are the stakes'

Professor Alan Sked, Emeritus Professor, Department of International History, London School of Economics and Political science, reflects on how things could develop in the coming weeks.

"The prime minister and other senior Conservatives including cabinet ministers insist that Britain will leave the EU on 31 October and that the prime minister will refuse to ask for an extension to Article 50. This is really upsetting the Opposition which now has a parliamentary majority and believes that it has passed legislation (the Benn Bill or ‘Surrender Act’ in the prime minister’s phrase) which compels him to do so. So would Boris break the law?

It is clear that the government thinks it can get round the Benn Act. But exactly how, no one knows and no one is saying. A deal with the EU seems unlikely but that might be one solution if Parliament would pass it. Again, the government might resign and force Corbyn or someone else to take responsibility. If there was no majority for a successor government, there would have to be an election which might then secure a majority for Boris and no deal. Tensions here are now very high. So, too, are the stakes."

The UK withdrawal from the EU has been postponed several times, as London has struggled internally over negotiating the divorce terms. Brexit is now scheduled to take place on 31 October, despite the previous 29 March deadline.

UK Prime Minister Boris Johnson is currently facing strong opposition domestically over his stance to pull the United Kingdom out of the bloc by the deadline, deal or no deal.

Johnson previously sought to suspend Parliament until 14 October in an attempt to ensure the United Kingdom's withdrawal from the European Union by the deadline. However, the UK Supreme Court ruled his move "unlawful."

The United Kingdom voted to leave the European Union in 2016. After former Prime Minister Theresa May failed to come up with an acceptable plan to leave the bloc by 29 March of this year, the deadline was moved to 31 October.