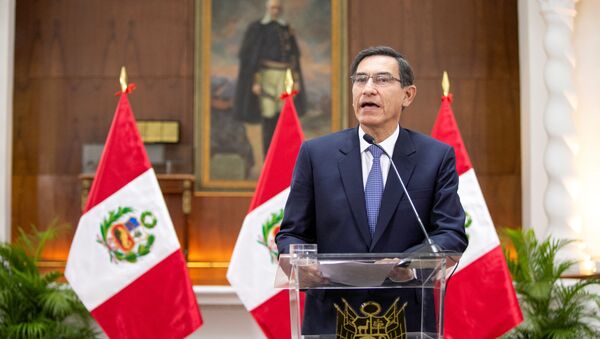 "In accordance with the Political Constitution of Peru, I have decided to constitutionally dissolve the Congress and call for congressional elections of the Republic; this is a constitutional act provided for in article 134 of the Constitution," Vizcarra said in a televised message on a national news station.

​Vizcarra announced the dissolution of the opposition-led Congress after it elected a new member of the Constitutional Tribunal Monday.

According to Vizcarra's televised statement, the dissolution of Congress and the calling for new elections fall under his constitutional powers, Reuters reported. Opposition lawmakers had tried to hinder Vizcarra's anti-corruption reforms.

Following Vizcarra's announcement, opposition lawmakers have accused Vizcarra of acting against the constitution and threatened to oust him as a result by filing a vacancy motion against Vizcarra in a legislative session.

​The country's constitution dictates that a president can dissolve Congress and call for elections if the Legislature rejects a vote of confidence on two occasions, according to AP, which noted that one vote has already taken place. Vizcarra took up the presidential duties after former Peruvian President Pedro Pablo Kuczynski ended his term in March 2018. Vizcarra's term is due to end in 2021.