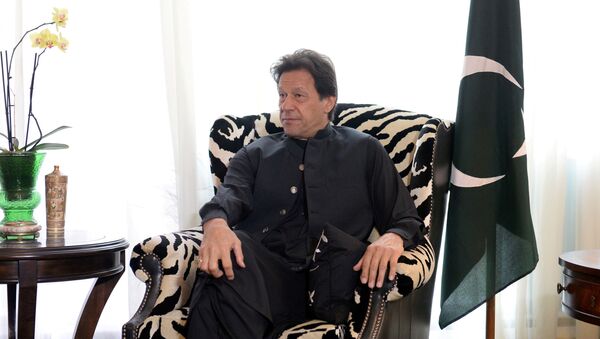 © REUTERS / Mary Calvert
Subscribe
International
India
Africa
New Delhi (Sputnik): After his campaign on behalf of Kashmiris at the United Nations National Assembly and with world leaders, Pakistan Prime Minister Imran Khan returned to Islamabad on Sunday (29 September) to a rousing welcome by his cabinet and party colleagues, as well as a large number of party workers.

On his arrival, Khan alleged there were eight million Kashmiris in Indian-occupied territory being held as hostage by Indian troops. He encouraged his countrymen not to get disappointed, as the people of Kashmir are looking to them and he has promised to be their ambassador.

“Whether or not the world stands with the Kashmiris, Pakistan will stand with them. This is a holy war (jihad). We are with them (Kashmiris), because we want to please the Almighty (Allah),” said Khan. “I will unmask the RSS government of Narendra Modi at all forums.”

In the Pakistani Prime Minister's speech at the United Nations General Assembly, which far exceeded his allotted time, he demanded that India must lift the “inhuman curfew” in Kashmir and release all “political prisoners”. He warned that if there is a face-off between the two nuclear-capable South Asian neighbours, it would have consequences reaching far beyond their borders.

Pakistan, which claims to be a stakeholder in Kashmir, was incensed at India’s decision to strip Jammu and Kashmir of its special quasi-autonomous status by amending Article 370 and 35A of the Indian Constitution.

India revoked the special status with a Presidential decree on 5 August and partitioned the restive state into two federally-administered territories in a move which was later ratified by the nation's parliament.

India and Pakistan have been at loggerheads over Kashmir since they attained freedom from British colonial rule in 1947.  Both countries rule part of Kashmir, while claiming the entire territory. They have also fought three wars since independence; two were over Kashmir.

Indian leaders have been asserting that the entirety of Jammu and Kashmir, including the Pakistan-occupied portion of Kashmir, is part of the country and the unfinished agenda now is to integrate the occupied territory with the rest of Indian Republic.

“Pak-occupied Kashmir belongs to India. It is under illegal occupation by Pakistan. We have expressed our bipartisan commitment to resolve that contentious issue and get the occupied Kashmir rid of Pakistan,” asserted India’s ruling nationalist Bharatiya Janata Party’s General Secretary Ram Madhav, in an interview last week.